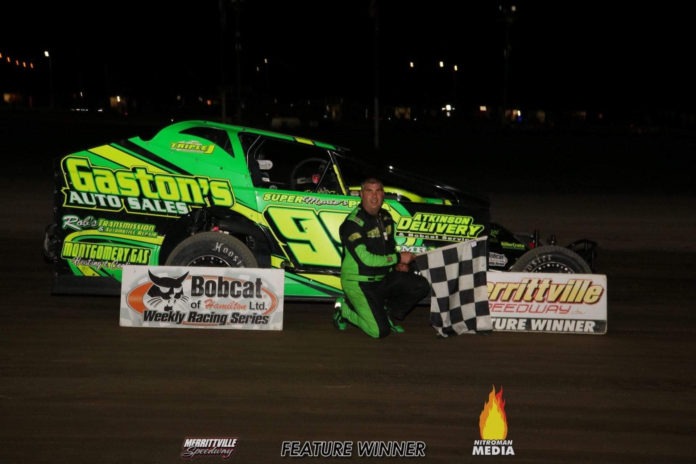 The Rick’s Delivery DIRTcar Sportsman feature saw Greg Panunte start on the pole with Taylor Vanderzanden starting second on the outside. Brad Rouse started the race shot out of a cannon, moving from 10th on the grid to inside the top five within the first two laps. On Lap three, Adam Leslie ran ninth which secured him a bonus $200 courtesy Brian from PM Lighting. Rouse would soon find himself contending for the lead and taking the point from Panunte after some masterful restarts. A late caution with fewer than 10 to go erased Rouse’s 1.2-second advantage, which gave Panunte one more shot to get back-to-back sportsman wins. After Rouse looked to have another masterful restart, it was deemed illegal and the field was lined up once again. This time Greg Panunte had the restart of his life from the outside of the front row and was able to find enough to speed pass and pull away from Brad Rouse who would have to settle for second, as Panunte won consecutive races in the Rick’s Delivery DIRTcar Sportsman at Merrittville.

Steve Shaw Sr. and Donny Lampman lead the field to green in Hoosier Stock action. On Lap 6, Chris Hale was awarded a bonus of $106 for running position 6 from Davey Moore. Fans were treated to another classic battle between Dave Bailey and Rob Murray as both drivers raced through the field from mid-pack starting spots. Bailey found his way to the front earlier than Murray, but late cautions never allowed the 49 of Bailey to get extremely far in front of the field. After failing to reach the white flag on two late restarts, the third time was the charm as the field stayed clean behind the leaders and Bailey captured his second feature win of the season at Merrittville.

Brent Begolo won the Saturday night feature in the Rona Doidge Building Centres Modified Lites. Begolo started from the outside of row one alongside pole-sitter R.J. Pietz, but it was Jeffery May who got out in front early. Begolo had to work hard to defend his 2nd spot as Josh Sliter charged through the field in search of his third win in a row. However, Sliter would spin in turns one and two, a rare mistake from the defending track champion. Begolo was able to use the restart to get passed May and never look back, as he would go on to score the win.

The race of the night was in the Central Fabricating/Glo & Go Tanning 4 Cylinder event, where Jay Moulton and Kyle Haynes lead the field to green. Moulton jumped out to an early advantage while Haynes, Fabio Olivieri, Austyn Werstroh, Dylan Llord, and Rob Shaw all battled for positions two through six. While racing underneath Haynes, Dylan Llord got loose and spun off turn four from the third position. This set the stage for more tight racing as the pack did not allow Moulton to get away as easily on this restart. Oliveri followed Moulton right in his tire tracks with Werstroh closing in as well. As the three cars worked the white flag lap, Olivieri was able to clear Moulton for the lead then hold off a strong run from Werstroh through three and four to claim the win by a slim margin at the line.

Josh Dmytrow went found victory lane in back-to-back weeks in the James Auto V6’s. Teddy Sheppard started from the pole with Dmytrow starting second for the second week in a row. Like last Saturday, Dmytrow would once again have to hold a late charge from John Couture. Couture was able to get alongside Dymtrow but could not make the bottom groove stick and would have to settle for second again.

78 cars signed in pitside for the evening’s festivities. The track did have a brief rain delay during the qualifying heats, but track personnel was able to keep the track in racing condition for the rest of the evening. Officials kept the show moving by forgoing intermission and pushing back victory lane ceremonies until the end of the night. All divisions did race their advertised race distances.

Merrittville is back in action on August 22nd with the S&W Service Centre 358 Modifieds headlining the show that will also feature Hoosier Stocks, Mod Lites, 4 Cylinders, and V6. Pit gates will open at 5 pm and race time is scheduled for 7 pm

Did Not Start: Clinton Nicholls