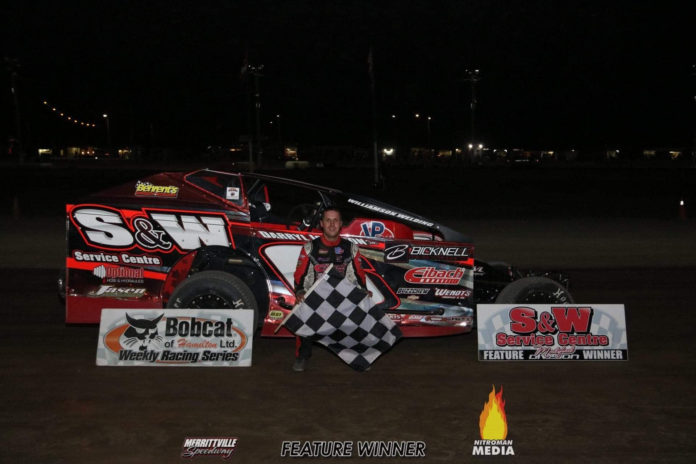 Matt Williamson won the S&W Service Centre 358 Modified feature, thanks to a little luck. The race was mostly dominated by Mike Bowman, who started third. Bowman quickly got around front row starters Fred Carleton and Scott Wood, before checking out the lead. Williamson started the 35-lap feature in seventh, and had a hard time advancing through the field. Bowman had built a lead over Scott Wood, by over six seconds before an incident with Todd Gordon who was 10th at the time and trying to stay on the lead lap ended both Bowman and Gordon’s nights. With four laps to go, Scott Wood held off Williamson and Gary Lindberg for one lap before another caution came out. This time with only three laps left, Williamson was able to get a great restart and pass Wood before the white flag and would go on and take the win.

In Rick’s Delivery DIRTcar Sportsman action, James Michael Friesen returned to victory lane. On an early stretch of green flag racing, Friesen built a comfortable lead over the field. Cody McPherson worked his way up to second from his fifth starting position. Brent Begolo also had a strong run, running amongst the top five for most of the evening. Friesen was able to survive multiple restarts, including some within the last five laps to win.

Donny Lampman broke through for his first career win at Merrittville in the Hoosier Stocks. Lampman had shown to be a contender in the division throughout the year but was never able to best veterans Rob Murray and Dave Bailey. Murray seemed to have the race won until damage from an earlier incident caused a right rear flat. Lampman would inherit the lead and would hold Steve Shaw to take the checkers.

The Central Fabricating/Glo & Go Tanning 4 Cylinder feature saw Kyle Rothwell pick up his first win of the year. After missing most of the season thus far, Rothwell was ecstatic in victory lane to not only win but to be able to be back at Merrittville.

Lastly, in the James Auto V6 division, Josh Dmytrow looked set to make it three feature wins in a row until he lost a right front bringing an end to his day. John Couture came from eighth on the grid to score the victory after battling with Dustin Duga and Jordan Fidler.

Speedway management would like to thank Pace Automotive for their support of the 358 Modifieds in the coming weeks at Merrittville Speedway.

Merrittville is back in action on August 29th with the 360 Sprint Cars returning to Merrittville. The Sportsman, Hoosier Stocks, 4 Cylinders and V6 will round out the racing card. Race time is scheduled for 7 pm. Fans can register for the lottery draw for admission tickets on Monday afternoons. Details are available on the Merrittville Speedway social media pages.