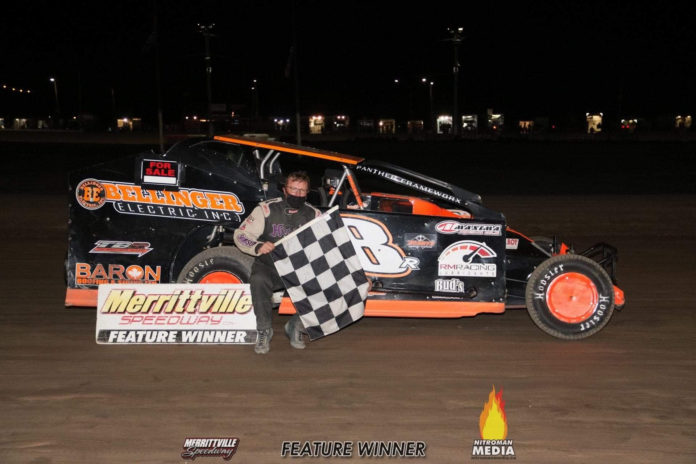 THOROLD, ON – Brantford, Ontario’s Mitch Brown scored the win in the 360 Sprint Cars as the “Winged Warriors” made their second appearance of the season at the Merrittville Speedway on Saturday night. Past track champion Brad Rouse from St. Catharines, Ontario picked up the win in the Rick’s Delivery DIRTcar Sportsman. Dave Bailey returned to victory lane in the Hoosier Stocks. Welland, Ontario’s Kyle Rothwell picked up the win in the Central Fabricating/Glo & Go Tanning 4 Cylinder Mini Stocks. Josh Dmytrow picked up another win in the James’ Auto V6.

The 360 Sprint feature was won by Mitch Brown, who survived several restarts, including one with just 2 laps left in the race. Brown was strong from the drop of the green flag, lapping several cars with ease. A red flag was thrown about halfway through the race after Cole McDonald flipped. McDonald was ok, and the race would re-fire with a lap car separating Brown from Cory and Ryan Turner who were running 2nd and 3rd respectively. On the final restart, Cory Turner was able to line on the back bumper of Brown, but nobody could deny Mitch Brown the victory. Cory Turner settled for second with Jordan Poirier finishing in third place. Ryan Turner and Liam Martin would complete the top five.

In Rick’s Delivery sportsman action, Brad Rouse dominated the race taking the lead early after starting in the fourth position. Pole-sitter Dave Flannigan Jr. fell back early but Trevor Wright, who started alongside Flannigan, was able to hold 2nd for most of the early portion of the race. As Wright battled to hang on to his position, he was being challenged by veterans Cody McPherson, Brent Begolo, and Greg Panunte, Rouse drove away from the field. Rouse’s lead at one point reached almost 8 seconds, as he negotiated lap traffic with ease. Rouse would nearly wire-to-wire, beating second-place McPherson. Brent Begolo, Greg Panunte and Chad Chevalier rounded out the top 5.

Clinton Nichols and Jens Mortensen lead the Hoosier Stocks to green in what was an all-time classic for the division. The top 10 to 15 cars remained tightly packed together for most of the race. Nicholls, and Mortensen both lead for multiple laps before Steve Shaw and last week’s feature winner Donny Lampman made their way to the front of the pack. With under 5 laps to go, Shaw dove to the inside of Lampman, but could not get the car to turn and both cars skidded into the wall off turn 4, allowing Bailey to take over the lead of the race. Bailey held off the field and scored another feature win at Merrittville this season.

The Central Fabricating/Glo & Go Tanning 4-cylinder feature saw Kyle Rothwell score back-to-back feature wins. Rothwell was able to work his way up from the twelfth starting spot and avoid multiple incidents to take the lead late. As the field was coming to the white flag, the skies opened and forced a red flag. After about 45 minutes, the race resumed, and Rothwell held off Fabio Olivieri in a one-lap dash to the checkered.

Lastly, in the James Auto V6 division, Josh Dmytrow made it three wins in his last four races. Dmytrow looked set to win last week’s feature before losing a wheel late. Tonight, the car held up, and Dmytrow was able to take the checkers.

NEWS AND NOTES: Jacob Dykstra sported a #67 on the wing of his 360 Sprint Car in honor of Pete Richardson, a longtime sprint racer from New York State who died earlier this month. The track had a pop-up shower that slowed the field down during the 4 Cylinder feature.

Merrittville is back in action on Saturday, September 5 with a full Bobcat of Hamilton Weekly Racing Series program with the S&W Service Centre 358 Modifieds joining the Rick’s Delivery Sportsman, Hoosier Stocks, Central Fabricating/Glo & Go Tanning 4 Cylinders, and the James’ Auto V6 rounding out the card.  Race time is scheduled for 7 pm. Fans can register for the lottery draw for admission tickets on Monday afternoons. Details are available on the Merrittville Speedway social media pages.