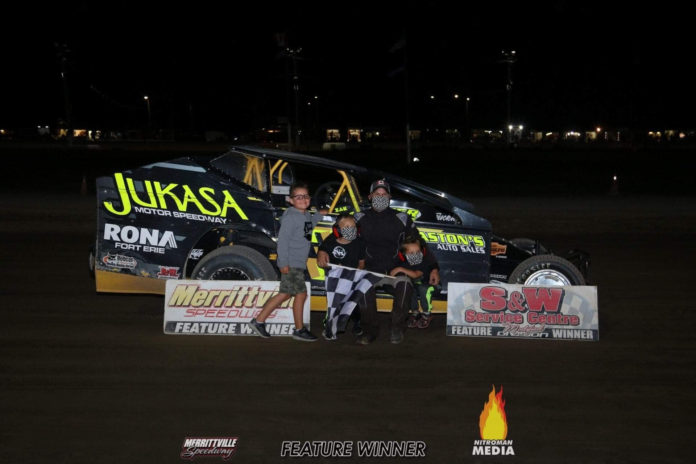 Dave Bailey and Rob Murray put on a battle that was another Hoosier Stock classic. The two multi-time track champions battled for several laps throughout the 20-lap affair, with Bailey getting the advantage by using the high side of the speedway to earn the win.

Josh Sliter scored his fourth win of the season in the RONA/Doidge Building Centre Mod Lites. Former track champ Jeff May led most of the event and Sliter passed May in the final corner to score the win.

Kyle Rothwell scored his fourth win in the Central Fabricating/Glo & Go Tanning 4 Cylinders. For Rothwell, it was his fourth win in the last five 4 Cylinder events held. Cameron Lane was disqualified in the main event for rough driving. Jordan Fidler broke the right front wheel on his V6 machine and he was still able to park it in victory lane.

Terry Keagan was honored pre-race by the Merrittville Speedway Reunion Committee with the CAA Niagara Dedication to Racing Award. Keagan and his company, Baron Roofing has been a title sponsor for several big races at Merrittville over the years and sponsoring several racecars, including Brad Rouse and Jordan Cosco, amongst others.

GForceTV will have the action from tonight on a tape delay. Fans can watch it anytime along with all the races from Merrittville in 2020 just by heading to www.gforcetv.net

The final stock car event of the 2020 season at Merrittville will take place on Saturday, October 3rd as the 360 Sprint Cars alongside the Rick’s Delivery DIRTcar Sportsman will headline the show. The RONA/Doidge Building Centre Mod Lites, Central Fabricating/Glo & Go Tanning 4 Cylinders and the James’ Auto V6 will fill out the Bobcat of Hamilton Weekly Racing Series program. Showtime is at 7 pm.

Fans can register for the lottery draw for admission tickets to the racing program by following the directions on the Merrittville Speedway Facebook and Twitter page. Fans can email donspiece.merrittvillespeedway@gmail.com between 5-9 pm on MONDAY evening, September 28th. The emails must include names, phone numbers, and hometowns for each person in your group.