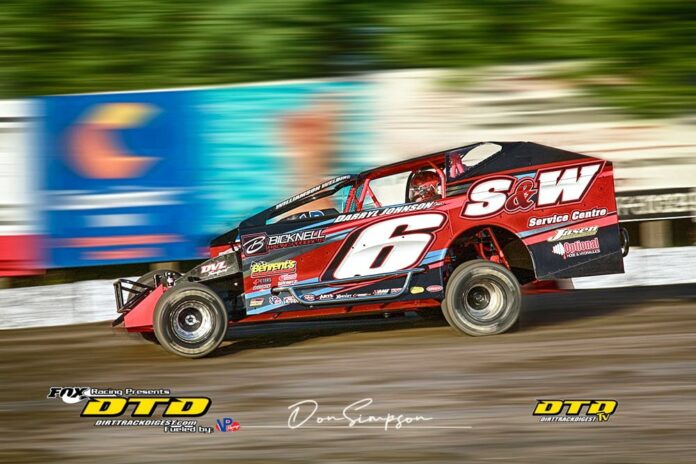 Mat Williamson cruised to the victory in the S&W Service Centre 358 Modifieds. “Fast Freddie” Carleton started from pole and battled alongside outside polesitter Austin Wood for several laps. Williamson soon entered the battle as the trio raced for much of the opening 15 laps under a blanket. Williamson was eventually to slip by Wood, then Carleton, and begin to distance the field. Lap traffic did not slow the number 6 car much at all and Williamson wrapped up another win. “There’s truly no place like home” for Williamson as he celebrated in victory lane to both cheers and some boos after fans saw what has become a regular occurrence at Merrittville, Mat Williamson in victory lane after another dominant win.

James Friesen wrapped up the win in the Rick’s Delivery Sportsman feature. Coming from the third starting position, Friesen quickly took to the high side and found himself out front. Late in the race, former track champion and Mr. DIRT titlist Cody McPherson began to make a charge at Friesen, as the long green-flag run played into McPherson’s hands. However, a late-race single-file restart gave Friesen the opportunity to get away one last time and Friesen was able to score the win.

Fans were greeted with another classic duel between Rob Murray and Dave Bailey in the Hoosier Stocks. Bailey started from the front row and soon found himself alongside Murray for several restarts in a caution-filled feature. Each time, Bailey was able to hold off Murray. In the final corner of the last lap, Murray was able to get to the back bumper of Bailey, but Bailey kept the car straight and reached the line first. Logan Shwedyk had a very noteworthy evening, winning a heat and running 3rd.


Brent Begolo used a trick he found in his qualifying heat to hold off his JSR Racing car owner Josh Sliter for the win in the feature event for the RONA/Doidge Building Centres Mod Lites. The third-generation driver used the extreme low line around Merrittville on both corners and the back straightaway, while Sliter made use of the high side. In the end, Sliter came up short as Begolo took the win over Josh Sliter, and Chris Watson.

In Central Fabricating 4 Cylinder action, the mission for the field was simple; beat Kyle Rothwell, something few were able to do in 2020. Opening night of 2021 proved that the task is still just as difficult. Rothwell made his way up from a middle of the pack starting spot into the top 5 in short order. On a restart, Rothwell was able to chase down Tyler Lafantaisie who started on the front row and make the move for the win. Lafantaisie, Austyn Werstroh, and Kenny Hair all had strong runs as well.

Patience proved fruitful on opening night for John Couture. The Dave’s Auto V6 feature came down to a battle between Jordan Fiddler and Couture, who worked hard for several laps to get position on the 22f. After laps of side-by-side battling, Couture slipped by on the inside and never looked back on his way to victory.

Next Saturday, the PINTY’S Knights of Thunder 360 Sprint Cars and the Action Sprint Tour will headline the show. The Rick’s Delivery Sportsman and Hoosier Stocks will round out the card. Follow Merrittville’s social media pages about ticket sales for next week’s event. Registration links will be available on social media in the beginning of the week. Racing will get underway at 7 pm. Follow Merrittville on social media including Facebook (facebook.com/MerrittvilleSpeedway), Twitter (@Merrittville), and now on Instagram (@merrittvillespeedway). For results, point standings, and more, check out www.merrittvillespeedway.com