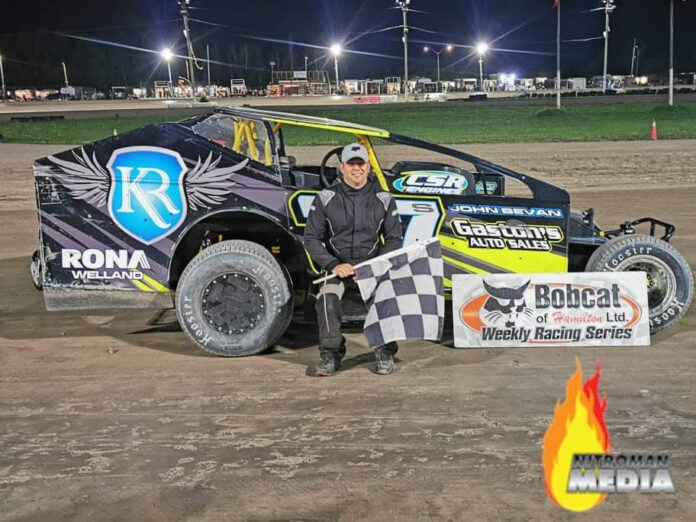 THOROLD, ON – After Mother Nature got in the way of last week’s racing at Merrittville Speedway, the threat of rain returned July 24th. This time, the rain would hold off and race fans got a full show of wild racing in that saw Gary Lindberg, Brad Rouse, Dave Bailey, Shawn Sliter, Tyler Lafantaisie, and Dustin Duga all visit victory lane.

2019 Modified divisional champion Gary Lindberg took domination to a whole other level in the S&W Service Centre 358 Modifieds feature. Lindberg found something special on the outside line and at times was over a half-second faster than any other car in the field throughout the race. Mat Williamson and Tim Jones made great drives from 12th and 13th on the grid up to the top five by races’ end. Even with multiple late restarts and Williamson alongside for a few of them, Lindberg could not be beaten and won handily over Williamson, Mike Bowman, Tim Jones, and Pete Bicknell.

The Rick’s Delivery Sportsman division saw former track champion and Mr. Dirt champion action saw Brad Rouse make his way to victory lane. After an early duel with Jay Mallory, Rouse was able to pull away, putting the number 18 wherever he needed to make time. Cody McPherson made a strong charge up through the field from 16th on the grid. However, the night belonged to Rouse, as he won in dominant fashion.

Dave Bailey and Rob Murray put on another masterful performance in the Hoosier Stocks as both came from the 9th row of the grid to finish 1-2. The race was controlled early by Evan Curtis, as he held off challenges from Mike Thorne for much of the early part of the race. As cautions fell, Bailey and Murray took advantage and marched their way forward and it was Bailey who got to Curtis and was able to drive away with another win on the season.

In Rona Doidge Building Centres Modified Lites action, Shawn Sliter grabbed the win in the 09. Sliter battled with Chris Watson throughout the race. Watson showed a lot of speedrunning the high side but danced a little too close to the edge, putting the 07 into the front stretch wall after jumping the cushion on the exit of 4. Sliter survived a late charge Brent Begolo and Josh Sliter and took the victory.

In Glo & Go Tanning 4-cylinder action, all eyes were on Kyle Rothwell who was something of a marked man. A bounty total of $500 was put up by Glo and Go Tanning, PM Lighting, Supreme Suds, and JL Concrete for someone to end Rothwell’s seven-race win streak. Jay Moulton led early and soon a three-car battle rose between Moulton, Austyn Werstroh, and Tyler Lafantaisie. Rothwell climbed from mid-pack to the top 6 before spinning Dylan Lord which sent them both to the back of the pack. But Rothwell would recover quickly and again entered the mix in the top 5 before a late restart. In the end, Lafantaisie would hold off the field in a 2-lap dash to the finish and end Rothwell’s win streak at seven.

Dustin Duga was a surprise winner in the V6 feature as bad luck found Jordan Fidler on the final lap. After leading much of the race unchallenged, Fidler saw his race come to a heart-breaking end as an axle problem caused him to slow on the backstretch of the last lap. Duga managed to be the best of the rest after dueling with John Couture and Josh Dymtrow throughout the feature. As Fidler broke, Duga found himself in the prime opportunity to take advantage and capture his first feature win.

Next Saturday, Exclusive Imprint presents a Bobcat of Hamilton Weekly Racing Series event plus the popular Family Autograph Night. Main gates open at 5:30 pm and racing begins at 7 pm. Fans need to register for grandstand admission. The link is available on Merrittville Speedway’s Facebook page as well as the speedway website. Follow Merrittville on social media including Facebook (facebook.com/MerrittvilleSpeedway), Twitter (@Merrittville), and now on Instagram (@merrittvillespeedway). For results, point standings, and more, check out www.merrittvillespeedway.com

Did Not Qualify: Cameron Lane

Did Not Start: Jim Lampman