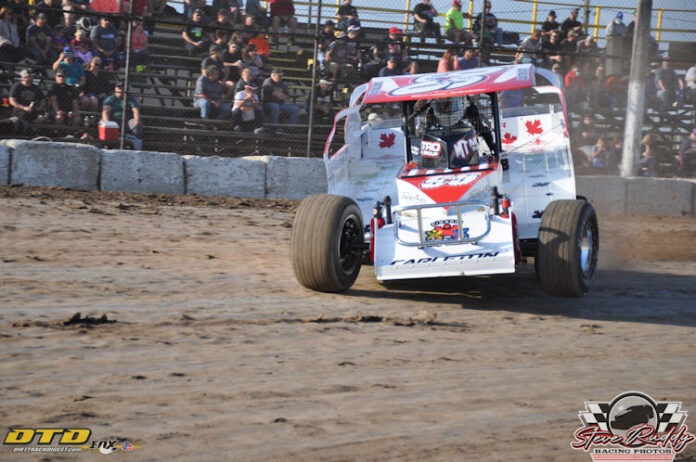 Dustin Duga secured his second V6 feature win in a row Saturday. After mechanical issues in the heat, Duga was ready to do battle with Josh Dymtrow for the victory. A bold move mid-race allowed Duga to get by and never look back as he took the feature win in the James Auto V6 event.

Glo & Go Tanning 4 Cylinder action saw a familiar face return to the victory lane as Kyle Rothwell ended his 1 race losing streak. Rothwell stole the win late from Ken Hair, who just last week, went for a wild ride when his 5k ride rolled violently in turns 3 and 4 at Merrittville Speedway. Hair controlled most of the caution filled event before Kyle Rothwell snatched the victory at the very end over Hair, and Fabio Oliveri.

The Rona Doidge Building Centres and RM Racing Lubricants Modified Lites saw a first-time winner. Randy Giroux was able to break through for his first victory in the series after starting 8th. In the first corner, the front row of Dave Cornish and Ryan Anderson were involved in an incident. Sean Iftody would soon take the lead when the race restarted. As laps began to click off, Giroux steadily marched to the front passing cars one at a time until he found the front. From there, Giroux was able to set sail and win in dominant fashion and enjoy a victory lap with the checkered flag as the trip to victory lane was long overdue.

The big money was on the line in the Exclusive Imprint and Hoosier Tire of Canada Street Stocks, as the feature paid $1000 to win. Unsurprisingly, Dave Bailey rose to the occasion to win his 3rd feature at Merrittville in 4 races this season. Bailey started 14th and found himself knocking on the door of the top 5 by lap 5 of the 20-lap feature. Other street stock favorite Rob Murray was involved in more than a few cautions, failed to have the same march through the field as Bailey. Instead, Justin Ramsey in 03 would emerge as the challenger to Bailey’s dominance. After climbing to 2nd from 17th on the grid, Ramsey pressured Bailey on a late restart but was never able to complete the pass and Bailey took the Win and The Purse.

Outside pole sitter Terry Smith had commanded for much of the race in the Rick’s Delivery and RM Racing Lubricants Sportsman. Smith was able to keep hungry drivers like Curtis Friesen, Brad Rouse, and Greg Panunte at bay, until a restart saw Smith get shuffled to the outside and fall out of contention. Brent Begolo, who started 13th would emerge victorious in yet another chaotic feature for the Sportsman.

In the S&W Service Centre 358 Modifieds, Tanner Podwinski and Dylan Davidson battled early, with Podwinski leading several laps. But as laps clicked off, Scott Wood began to reel in Podwinski and eventually lead multiple laps himself. Meanwhile, Fred Carleton worked his way up from 11th to battle with Wood for the lead on a restart. Wood took the high side and Carleton used the low line to make the pass and begin to driveway. With 10 laps to go, Pete Bicknell made his way up to second and started eating into the nearly 2-second advantage Carleton had built on the field. Although the lead continued to shrink, the laps ran out and Bicknell would settle for second as fan-favorite “Fast Freddie” Carleton captured the checkered flag.

Merrittville is back in action on Civic Holiday Monday as Go-Getters presents the Duel on the Dirt races for the Hoosier Stocks and 4 Cylinders, plus Modifieds and Sportsman. The night will end with an Enduro qualifier and Fireworks! Main gates open at 5:30 pm and racing begins at 7 pm. Fans need to register for grandstand admission. The link is available on Merrittville Speedway’s Facebook page as well as the speedway website. Follow Merrittville on social media including Facebook (facebook.com/MerrittvilleSpeedway), Twitter (@Merrittville), and now on Instagram (@merrittvillespeedway). For results, point standings, and more, check out www.merrittvillespeedway.com