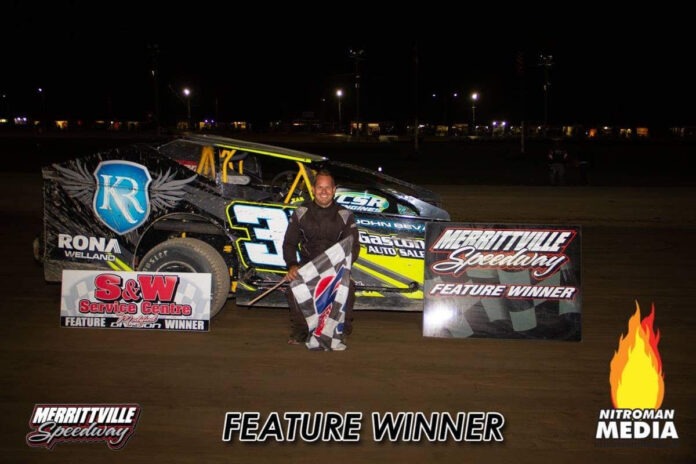 Tanner Podwinski led the field of S&W Service Centre 358 Modifieds to the green flag and controlled the early portion of the race. Scott Wood climbed from 10th position to challenge for the top spot. After making the pass for the lead, Gary Lindberg would follow in pursuit from his 16th starting spot. A caution would bunch the field up, and Lindberg had a fantastic restart which allowed him to take the lead from Wood. For the rest of the race, Wood would chase Lindberg but not even a green, white checkered finish could stop Lindberg. Gary Lindberg would win over Mike Bowman, Scott Wood, Tim Jones, and Fred Carleton.

It was a special night for the Rick’s Delivery/RM Racing Lubricants Sportsman, as Billy Bleich Jr. captured not only his feature win but also the Bill Willard Sr. Sterling Silver trophy. Bleich Jr. started from the 7th position and showed speed early, quickly jumping into the top 5. After completing the pass on John Babion, Bleich Jr. drove away from the pack in a dominant fashion. 2nd place was a hard-fought battle for several laps between Dave Flannigan, Justin Sharp, Luke Carleton, and Cody McPherson. Though none of them could break away to mount any kind of charge for the lead, Bleich Jr. would cruise to victory.

In Hoosier stock action, it was the same song, different verse with Dave Bailey winning again at Merrittville. Bailey made it 2 for 2 on the weekend after following up a win on Friday night, by coming from the 18th starting spot. Multiple cars suffered flat tires and damage because of close-quarters racing but Bailey negotiated the chaos expertly to win over Jason Fontaine, Rob Murray, Spencer Smolders and Devon Bacher.

In Modified Lites, Tyler Winger captured the win getting some redemption of his own. Winger was in contention for a win earlier in the season but made a mistake to take himself out of it. However, it was Winger’s night who dueled with Jeffery May for much of the race. May took the lead from Winger in the first stint of the race, but after a caution, tides would turn. May lead but as green flag run went, it was Winger’s car who would emerge as the car to beat. Winger slipped by May to take the lead once again and never looked back, beating May, Brent Begolo who rebounding from a spin, Shawn Sliter, and Sean Iftody.

Austyn Werstroh was on a quest for redemption. Werstroh crossed the line first in a feature last weekend at Merrittville, however, his car failed post-race technical inspection and he was disqualified. Tonight, Werstroh wouldn’t be denied. Fighting his way through the field from 9th starting position, the 71w held off multiple contenders including Tyler Lafantasie, Jay Moulton, and Kyle Rothwell. Rothwell would challenge Werstroh’s lead but couldn’t get by, and ended up second, with Lafantasie, Trevor DeBoer, and Olivier Larocque rounding out the top five.

In James Auto V6 action, Dustin Duga survived a wild race that saw nearly half the field go out with damage. Duga shot out to the lead early on the outside lane and would battle Josh Dmytrow for the win. Under green, Dmytrow could not find a way by Duga, who controlled the race in his 14DD. Duga’s marked his third consecutive in the V6 division.

Merrittville is back in action for a second straight doubleheader weekend beginning Friday, August 13 as the Burger Barn presents the 360 Sprints, Crate Sprints, Hoosier Stocks, and 4 Cylinders. The following night, Peters Construction Group presents the Action Sprint Tour along with the 358 Modifieds, Hoosier Stocks, Mod Lites, 4 Cylinders, and V6. Main gates open at 5:30 pm and racing begins at 7 pm. Follow Merrittville on social media including Facebook (facebook.com/MerrittvilleSpeedway), Twitter (@Merrittville), and now on Instagram (@merrittvillespeedway). For results, point standings, and more, check out www.merrittvillespeedway.com