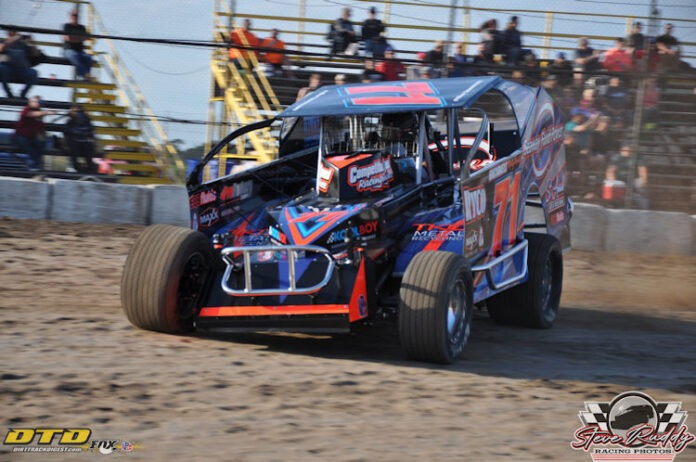 The S&W Service Centre 358 Modifieds concluded the evening with a great race that saw Mike Bowman get the monkey off his back to win for the first time this season. Derek VanMil led the race early, holding off Trevor Wright who raced tonight in honor of long-time supporter and former racer Wayne Howard. Todd Gordon would join into the battle as well as Pete Bicknell and Fred Carleton. The ultra-competitive race saw Todd Gordon take the lead, but Mike Bowman emerged from his 12th starting spot to challenge Gordon about halfway into the 35-lap feature. As most cars fought for the extreme low line, Bowman was able to move up, find speed, and put his car out front. However, a late caution would erase Bowman’s comfortable margin and put Bicknell right on Bowman’s tail. Bicknell couldn’t find a way around him, and Bowman would hang on to get back to his winning ways.

The Action Sprint Tour joined the fun Saturday at Merrittville Speedway. Jacob Dykstra put on a master class in negotiating lap traffic. While pole-sitter Brett Stratford would lead early and survive multiple restarts out front, as the race wore on, Dykstra eventually found a way around Stratford. Allen Downey charged his way up to from 7th starting spot to battle with Stratford and outside polesitter Jesse Costa for 2nd, but that was as close as he or anyone would get to the lead. Dykstra won in a dominating performance over Stratford, Downey, Costa and Steven Beckett rounded out the top 5.

In Hoosier stock action, the question of who would beat Bailey and Murray was finally answered by Ryan Beagle. Beagle took advantage of a good starting position, 8th in a field of 24 cars, to get out front early. Beagle would spoil the Lampman party on the front row, being the first in the by father and son duo Jim and Donny. This allowed Beagle to put his 84RK out in front by a sizeable margin before Dave Bailey made his inevitable trip up to the front of the field. However, Bailey could not close the gap, and Beagle would score the win and be the third driver to win in Hoosier Stocks this season at Merrittville.

In James Auto V6 action, an early battle emerged between Josh Dmytrow and John Couture for the lead. Jordan Fidler and Dustin Duga would join in to make the battle for the lead a four-car battle. When Couture and Dmytrow tangled, it was Duga who was able to get through cleanly and win yet again.

Glo & Go Tanning 4 Cylinder action saw Kyle Rothwell return to his winning ways. After starting 10th, Rothwell would work his way up to the front of the field, to do battle with Tyler Lafantasie, Ken Hair, and Austyn Werstroh. Multiple cautions would fall throughout the race, which insured no one could really get away until Rothwell got out front late and drove off to another victory.

The Rona Doidge Building Centres Modified Lites saw Chris Watson break through for a win. Watson had shown speed throughout the season but was never able to put it all together. Tonight, he wouldn’t be denied, working hard from his 11th starting spot to do battle with R.J. Pietz for the win. Watson held off Tyler Winger’s late charge and scored the victory.

Merrittville is back in action on Saturday, August 21 for Nostalgia Night, featuring the 50-lap Jerry Winger Memorial for Modifieds plus Sportsman, 4 Cylinders, and Vintage Cars. Main gates open at 5:30 pm and racing begins at 7 pm. Follow Merrittville on social media including Facebook (facebook.com/MerrittvilleSpeedway), Twitter (@Merrittville), and now on Instagram (@merrittvillespeedway). For results, point standings, and more, check out www.merrittvillespeedway.com