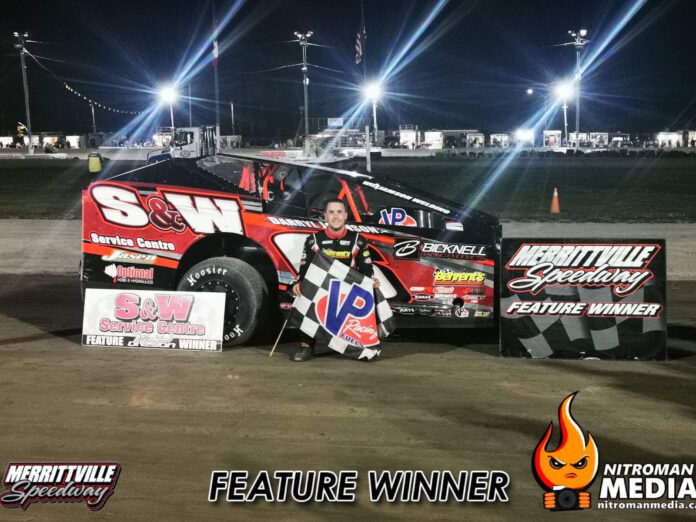 THOROLD, ON – It was Fan Appreciation Night presented by Country 89 and Giant FM at Merrittville Speedway on Saturday. Bobcat of Hamilton Weekly Racing saw all 6 divisions take to the track for a wild night of racing on an extremely fast track. Mat Williamson, Brad Rouse, Dave Bailey, Jeffery May, Jay Moulton, and Jordan Fidler all took home wins.

Jordan Fidler was the first on the night to find victory lane in the James Auto V6 division. Fidler started third and quickly found himself in a battle for the lead with John Couture who started second. The pair were side by side for several laps before Fidler would ultimately prevail to get back to victory lane.

In the Glo & Go Tanning 4 Cylinders, Jay Moulton took advantage of his outside pole starting position to get to the lead, where he would remain for the entire race. Multiple drivers tried to break out from the pack to challenge Moulton including, Rob Shaw, Ken Hair, Tyler Lafantasie, and Kyle Rothwell. Rothwell would get closest, as Moulton struggled to lap rookie Hana Rothwell who has been battling mechanical gremlins throughout the season. As Kyle Rothwell approached the back bumper, he made contact with his daughter Hana and would fall to just outside the top 5. Moulton would go on to win, while Hair, Shaw, Austyn Werstroh and Lafantasie rounded out the top 5.

Jeffery May enjoyed a Saturday night cruise to victory in the Rona Doidge Building Centres Rm Racing Lubricants Modified Lites. May showed speed early in his heat and kept up the blistering pace in the feature. Not even a late-race restart with the pack bearing down on him could slow May down as he drove away to the win over Brent Begolo, Randy Giroux, Sean Iftody, and Josh Sliter.

Trouble found multiple front runners early in the Hoosier Stocks. Three of the front four starters would be involved in incidents in the first half of the race. This shook up the field and allowed the always fast Dave Bailey to quickly find his way from 16th starting up to the front. Bailey had good battles with Clinton Nichols, Mike Thorne, and Evan Curtis throughout the race, but no one could match Bailey’s pure speed and smooth lines. Bailey would take yet another checkered flag at Merrittville with Thorne finishing second, Jason Fontaine third, Chris Hale fourth, and Rob Murray rounding out the top 5.

Chaos erupted almost immediately for the Rick’s Delivery RM Racing Lubricants Sportsman, when polesitter Curtis Friesen jumped the start. After the initial start was called back, full contact stock car racing broke on the restart, with drivers beating and banging around the exceptionally fast Merrittville track. Tight racing throughout the field led to several yellows including a big incident that James Friesen and Billy Bleich Jr. crash while racing inside the top 5. That set up a 1 lap shootout with Brad Rouse on the back bumper of Justin Sharp, who had built a comfortable lead under green before the caution flew as the field was coming to white. On the restart, Rouse made a fantastic move to the inside and was able to clear Sharp down the backstretch to steal the victory. Sharp, Jay Mallory, Cody McPherson, and Brent Begolo completed the top five.

Mat Williamson kept his momentum rolling in the S&W Service Centre 358 Modifieds. Fred Carleton and Gary Lindberg tangled for an early incident in the 35-lap feature. On the restart, Chad Chevalier emerged with the lead and began to drive away from the field before Carleton, trying to stay on the lead lap after quick repairs, spun in the turn three in front of Chevalier, ending his chances at victory. Williamson, who had worked his way to second from 11th starting spot, inherited the lead, and never looked back. Williamson’s margin of victory was about half the racetrack. Gary Lindberg would rally to finish second, Trevor Wright third, Austin Wood fourth, and Pete Bicknell fifth.

Merrittville is back in action on Saturday, September 4 as Semenuk’s Esso presents the final points night of the season. A full Bobcat of Hamilton Weekly Racing Series Program will take place. Main gates open at 5:30pm and racing begins at 7pm. Follow Merrittville on social media including Facebook (facebook.com/MerrittvilleSpeedway), Twitter (@Merrittville), and now on Instagram (@merrittvillespeedway). For results, point standings, and more, check out www.merrittvillespeedway.com

Did Not Start: Nathan Peattie