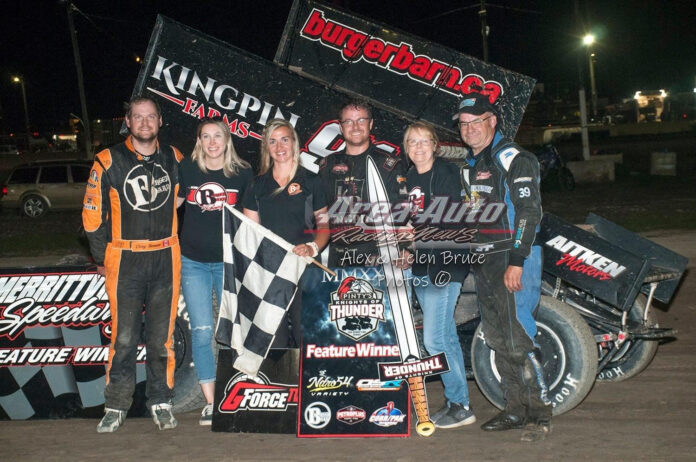 THOROLD, ONTARIO  Ryan Turner from Dunnville, Ontario returned to victory lane at Merrittville Speedway Friday night as the Pinty’s Knights of Thunder 360 Sprint Car Series invaded to close out the 2021 season. It was Turner’s first win of the season at Merrittville. Jacob Dykstra from Port Colborne, Ontario won the Action Sprint Tour A-Main for his third Merrittville victory of the season. “Brewster Baker” Dave Bailey from Hagersville, Ontario continued his dominant season by winning his ninth Hoosier Stock feature of the season. Mark Fawcett claimed the win in the Hoosier Stock non-winners race to end the program. John Lubeck from Port Colborne, Ontario won his first Glo & Go 4 Cylinder feature of the season. The entire show was broadcasted to an international audience live on GForceTV.

Feature time opened with a final Glo & Go Tanning 4-cylinder feature. John Lubeck was a man on a mission. After steadily showing improvements in speed throughout the shortened season at Merrittville, he reached the peak of the mountain. Lubeck drove from 11th to take the win over Brian Aube, Mark Bazuin, Anthony Kelly, and Kyle Rothwell.

In the Action Sprint tour, Eric Gledhill dropped a heartbreaker to Jacob Dykstra. Gledhill quickly emerged with the lead after slipping by polesitter Dykstra on the first lap. Gledhill would lead every lap but the last one after lap traffic allowed Dykstra to power around the outside of Gledhill in the final corner to steal the win. Gledhill would settle for second and Nick Sheridan third.

Hoosier Stocks saw action on the fast Merrittville track next. Once again, it was Dave Bailey, who started from the pole, capturing one last checkered, on the track he was so strong at all season long. The 2021 track champion Bailey crossed the line in front of Jason Fontaine, Clinton Nicholls, Mark Fawcett, and Rob Hoskins.

The Pinty’s Knights of Thunder 360 Sprints put on a fantastic show, with comers and goers exchanging positions throughout the 25-lap event. It looked like DJ Christie’s race to lose as he controlled a final late restart. Ryan Turner, however, spoiled the party after Christie left the door open in 1 and 2 on the final lap. Christie mounted one last charge in 3 and 4 but failed to get back to the front and Ryan Turner grabbed the checkers. Mack DeMan was third, with Josh Hansen fourth and Jim Huppenen 5th.

The night closed with a final Non-Winners Hoosier stock event. Plenty of cars competed in the field looking to break the goose egg on the season. In the end, it was Mark Fawcett would win the final stock car event of the season at Merrittville. Zach Bleich was second, Chris Hale third, Rob Hoskins fourth, and Clinton Nicholls fifth.

The Friday night special ended the stock car portion of the Merrittville Speedway 70th anniversary season schedule. The next scheduled event will be the Monsters of Merrittville on Saturday, September 18.