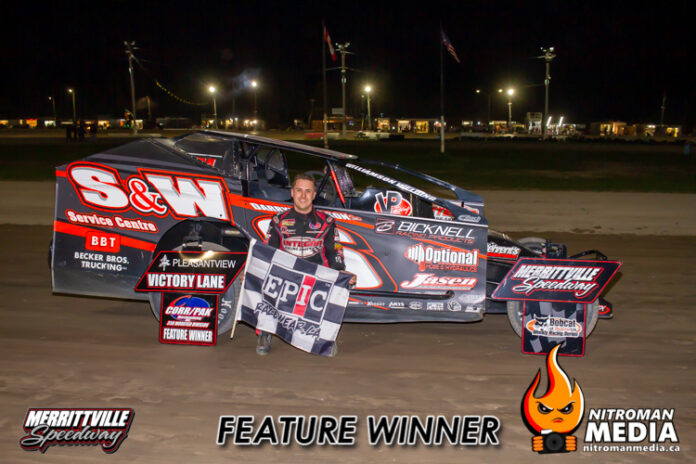 THOROLD, ON – The cream rose to the top in a classic battle amongst some of the Corr-Pak Merchandising 358 Modified’s very best at Merrittville, and it was Mat Williamson of St. Catharines, Ontario who emerged victorious as Loop Paint presented Bobcat of Hamilton weekly racing at Merrittville Speedway. Cody McPherson also from St. Catharines, won the Right Choice Auto & Leisure DIRTcar Sportsman feature. Dave Bailey of Hagersville, Ontario scored the win in the first Insta Panels Duel on the Dirt Home Track event in the Hoosier Stocks. The Rona Doidge Modified Lites feature was captured by Brent Begolo. In the Vansickle Pet Valu/PV on the Lane 4 Cylinder feature, Thorold, Ontario’s Tyler Lafantaisie captured the win, while Dustin Duga went to Pleasantview Victory Lane in the V6 division.

Ryan Suscie and Shayne Pierce lead the Corr-Pak Merchandising 358 Modifieds to green for a 35-lap feature event, however caution flew early. On the restart, Gary Lindberg emerged with the lead from his 3rd starting spot, and drove off, amassing a near 1 second lead. Another caution fell after Luke Carleton slowed, erasing the gap Lindberg had built. On the restart, Matt Williamson used a bold move on the back stretch to power past Chad Chevalier before the caution fell once again for Shayne Pierce and Scott Wood. Lindberg was able to hold off Suscie and Williamson and amass another large gap over Williamson who now ran second. As Lindberg was held up by lap cars, Williamson reeled in Lindberg and was able to make the pass as Lindberg was stuck behind two cars side by side battling for position. Williamson would drive away, while Suscie tracked down Lindberg on the last lap to take his third consecutive 2nd place finish.

Billy Bleich Jr and Justin Sharp made up the front row in the 25-lap feature for the Right Choice Auto & Leisure DIRTcar Sportsman, with Sharp emerging as an early front leader. Sharp would lead through much of the race, while Bleich struggled with handling as the race went on. Brad Rouse and Cody McPherson established themselves as the main contenders for Sharp. McPherson took several laps to track down Sharp but was eventually able to maneuver his way past Sharp who was committed to the top side of the track. It was the ultimate birthday present for McPherson who turned 30 on Saturday and celebrated in Pleasantview Victory Lane.

The first Home Track event for the Insta-Panels Duel on the Dirt took place on Saturday at Merrittville Speedway, with Jim Lampman and Mark Fawcett leading the field of 23 Hoosier Stocks to green. Fawcett got out to an early following a restart before he suddenly slowed in front of the field, nearly causing calamity for multiple front runners who were battling for 2nd through 5th positions. Dave Bailey, who started 9th, made his way to the front, and passed Jason Fontaine after a hard battle, to score the victory.

Some Merrittville’s finest in the Rona Doidge Building Centres Mod Lites put on an incredible show, with Rob Misner and Josh Sliter bringing the field to the green flag. Sliter found himself battling with Jeffery May, Brent Begolo and Tyler Winger throughout much of the 20-lap feature, with all four cars swapping the top four positions. Begolo had showed race winning pace the previous week before being collected in an incident. However, this week Begolo was able to best the field and take the checkered flag in 1st.

Trevor DeBoer and Austyn Werstroh made up the front row after Ken Hair elected to start tail and forfeit his outside pole position in the Vansickle Pet Valu/PV on the Lane 4 Cylinders. Jay Moulton found his way to the front early, with DeBoer, Clinton Barrick, John Luebeck and Tyler Lafantaisie establishing themselves as the main rivals for the win in the 15-lap event. Lafantaisie gained 8 spots from the start, eventually taking the lead and the win. Barrick would finish second and John Luebeck who crossed the stripe inside the top 3 was disqualified for not going to scales.

Jordan Fidler and Dustin Duga lead the field to green in the first appearance for the V6 division at Merrittville Speedway. It was 2021 champ Duga who would emerge victorious in the 12-lap feature. Fidler and Josh Dmytrow rounded out the top 3.

The 71st season of racing at “Canada’s Oldest Dirt Track” will continue May 14th as 2 Cool Automotive presents a full card of Bobcat of Hamilton Weekly Racing Series action. The Corr-Pak 358 Modifieds will contend for the Brian Stevens Memorial featuring the $444 Pole Dash Challenge. The Vansickle Pet Valu/PV on the Lane 4 Cylinders will also compete in event #1 in the St. Catharines Husky Duel on the Dirt. The Right Choice Auto & Leisure DIRTcar Sportsman, Hoosier Stocks, and RONA Doidge Builders Mod Lites will also be in action. Pit gates will open at 5:00 pm, grandstands open at 5:30, and racing will begin at 7:00 pm.