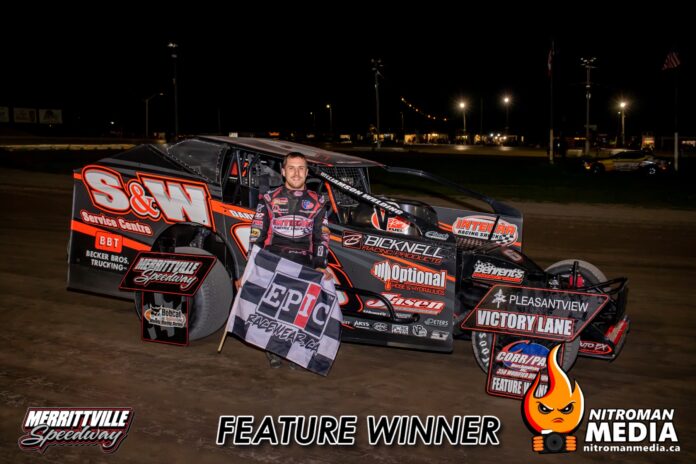 After having last week off due to a rain out, the Corr/Pak Merchandising 358 Modifieds returned to action at Merrittville Speedway. Tanner Podwinski and Dylan Davidson made up the front row for the feature. Mat Williamson made his way up to the top spot after starting 11th. The win marked Williamson’s second of the season at Merrittville. Pete Bicknell, Gary Lindberg, Fred Carleton, and Chad Chevalier completed the top 5.

After Trevor Want and Bryce Richardson took the green in the Hoosier Stocks, it would be two weekly favourites emerging from the mid pack to duel for the checkers. Chris Hale, who started 13th was able to hold off Dave Bailey who started 12th. Rounding out the top five was Mark Fawcett, Kyle Pelrine, and Donny Lampman.

Ryan Anderson and Leroy Buscumb made up the front row for the Rona Doidge Building Centres Modified Lites feature. A familiar face would once again find himself in Pleasentview Victory, as Brent Begolo made it three wins in a row in the division. Begolo scored the win over Josh Sliter, Tyler Winger Chris Watson, and Dillan Sliter.

The 71st season of racing at “Canada’s Oldest Dirt Track” gets back in action June 4th with a full night of Bobcat of Hamilton Weekly Racing events presented by Auto FX Graphics & Signs. Corr/Pak 358 Modifieds, Right Choice Auto & Leisure DIRTcar Sportsman, Rona Doidge Building Centres Mod Lites, and Vansickle Pet Valu/PV on the Lane 4 Cylinders will all take to the track to begin June. The V6’s will also see another race and the Big Bike Giveaway on this evening as well. Pit gates will open at 5:00 pm, grandstands open at 5:30, and racing will begin at 7:00 pm.