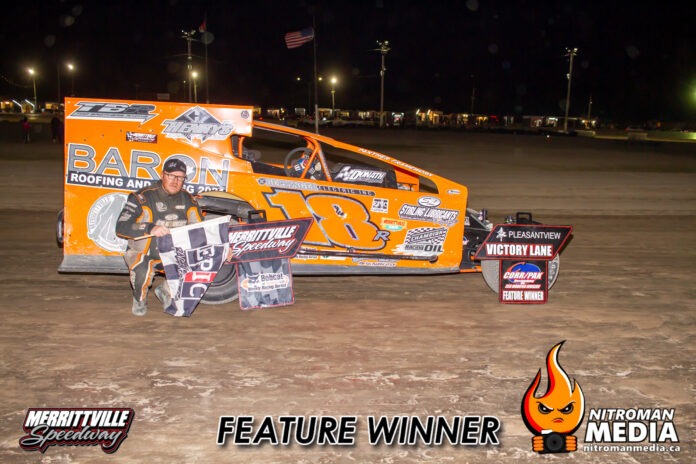 An exciting race in the Corr/Pak Mercahndising 358 Modified’s resulted in a great finish and a first-time winner. Derek VanMil and Scott Wood lead the field to green on the front row before an early caution involving Gary Lindberg reset the field. Wood was able to check out on the restart, leading most of the early part of the race until lap traffic became a factor. As Wood struggled to lap the field, Brad Rouse, and Ryan Susice ran him down with Rouse able to pull alongside, and eventually pass Wood who faded to 7th. Rouse was then tasked with holding off Ryan Susice, and Chad Chevalier. Susice had speed but couldn’t find a line to get by Rouse and Rouse would secure his first ever Modified win at Merrittville. Susice was 2nd, Mat Williamson 3rd, Chad Chevalier 4th and Pete Bicknell 5th.

Cautions were frequent in the Right Choice Auto & Leisure Sportsman, leading to plenty of wild restarts. Jason VanMil and Nelson Mason made up the front row with Mason jumping out to an early lead. Rob Knapp was able to take the lead before halfway using the outside line. James Friesen took advantage of the seas parting multiple times, allowing him to drive from 11th to 1st. Friesen would have to survive a late restart with Cody McPherson in hot pursuit as the field was set single file, but time would run out for McPherson to challenge for the win. Friesen captured the checkered flag, with McPherson 2nd, Rob Knapp 3rd, Nelson Mason 4th and Jay Mallory 5th.

The Hoosier Stock feature win was ultimately settled in the pits after the racing on track. John Couture and Gofast Teeple started out front, but a caution flag would wave early, as Mark Fawcett spun in front of the field going for the lead in turn 2 of the opening lap. Rob Murray drove up to the front of the field from 14th and would see the checkered flag first ahead of Dave Bailey. However, Murray’s car failed to make weight and was disqualified. This handed the win to Bailey, Donny Lampman was credited with 2nd, with 3rd going to Kyle Pelrine, 4th to Jason Fontaine and Zach Bleich was awarded 5th.

Rona Doidge Modified Lite action saw two familiar faces rise to the top of the pack to do battle once again. Leroy Buscumb and Dillan Sliter started on the front row with Sliter showing speed early before eventually finishing 5th. Tyler Winger marched from the outside of row 4 to the front quickly, while Brent Begolo took a more methodical approach. Begolo’s patience proved to be the winning strategy as he was able to pass Winger and score another win. Winger was 2nd with Dillan Sliter 3rd. Sean Iftody was 4th and Josh Sliter rounded out the top 5.

The Vansickle Pet Valu/PV on the Lane 4 Cylinders contested the second home race of the Insta-Panels Duel on the Dirt on Saturday. John Luebeck and Dylan Llord made up the front row with Llord getting the advantage early. Tyler Lafantaise and Austyn Werstroh emerged as the class of the field and would battle wheel to wheel for several laps. After multiple moments of paint trading and great racing Lafantaise cleared Werstroh to take the win. Werstroh settled for 2nd, with Trevor DeBoer 3rd, Jay Moulton 4th and Dylan Llord 5th.

Bobcat of Hamilton Weekly Racing returns June 25th with Cotton Inc. presenting the S.O.S. Sprint Tour who will be competing in the Gary Cunningham Memorial. The Corr/Pak Merchandising 358 Modifieds, Hoosier Stocks and 4 Cylinders will also be in action. Merrittville Speedway will also hold the Tim Horton’s Enduro Qualifier #2 accelerated by JC Auto. Be sure to bring your change for Toonie Hot Dog night. Pit gates will open at 5:00 pm, grandstands open at 5:30, and racing will begin at 7:00 pm.