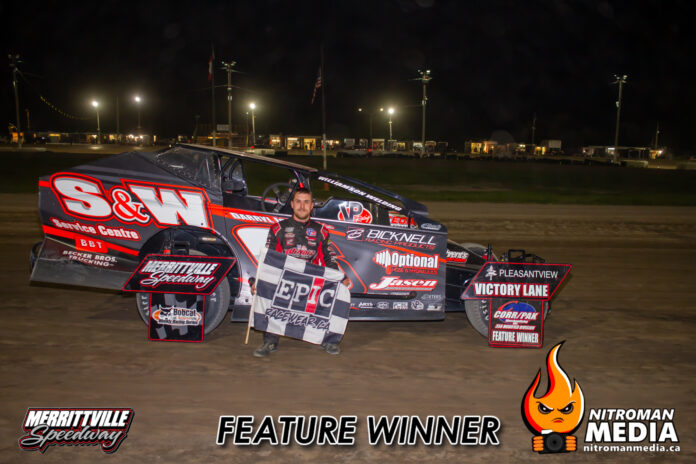 The Corr/Pak Merchandising 358 Modified feature became a race to merely finish, let alone win. Dave Flannigan Jr. started outside pole and quickly got the lead from pole sitter Brandon Gruhl. Flannigan’s early advantage would be erased when Boyd MacTavish stopped on the track and brought out a caution. Flannigan would once again get out in front of the field, now leading Ryan Susice, but again the caution flew as Fred Carleton suffered a mechanical issue that laid fluid on the track. Tanner Podwinski would be next to bring out the yellow with Flannigan out front again. On the restart, a three wide battle between Susice, Mat Williamson, and Gary Lindberg for second saw Lindberg spin, before being hit by Shayne Pierce, who’s car turned over after the contact and spin. Pierce would walk away from the incident under his own power, and Lindberg would retire his car following the restart. Susice would finally end Flannigan’s control of the lead, however that would be short lived as Mat Williamson tracked him down and took the lead within the last 10 laps. Brandon Gruhl’s mechanical problems set up a three-lap shootout, but Williamson would hang on and take the win over Susice, Pete Bicknell, who past Flannigan at the line. Chad Chevalier would round out the top 5.

The Southern Ontario Sprint Tour was in action at Merrittville Speedway battling for the Gary Cunningham Memorial crown. Cory Turner started on Pole, but the race was red flagged before the field could finish a lap when Shawn Sliter tumbled and flipped multiple times in turn 2. Sliter would be okay and walk away, and the race would restart with Cory Turner out front. A late restart placed Ryan Turner behind Cory for a sibling battle, but Ryan Susice would break up the party by getting passed Ryan Turner. Cory Turner would lead wire to wire to score the victory over Susice, brother Ryan Turner, 4th place finisher Liam Martin and Travis Cunningham finished in the race named for his late father.

Jim Lampman and GoFast Teeple lead the field to green in the Hoosier Stock feature. Thanks to a fast track, both drivers would be able to stay up front and battle for the lead side by side for several laps. Passing was a challenge with both lanes working well. Lampman was able to get away for several laps with the lead. However, the yellow flag would bunch the field back up, and on the restart, Dave Bailey would come away with the lead when Lampman slipped up and fell back in the pack. Bailey took the checkered flag first, winning over Zach Bleich, Kyle Pelrine, Rob Murray, and Jason Fontaine.

A new winner on the season emerged in the Vansickle Pet Valu/ PV On the Lane 4 Cylinders Saturday night. Richard Hadler lined up on the front row alongside Jordan Denobriga, with Hadler leading several laps to begin the race. The race win would ultimately come down to a battle of 5’s, with the 5K of Ken Hair able to hold off the 5 of Brian Aube, to visit Pleasentview Victory Lane for the first time this season. Aube would finish 2nd, Leroy Buscomb 3rd, Austyn Werstroh 4th and Trevor Deboer 5th.