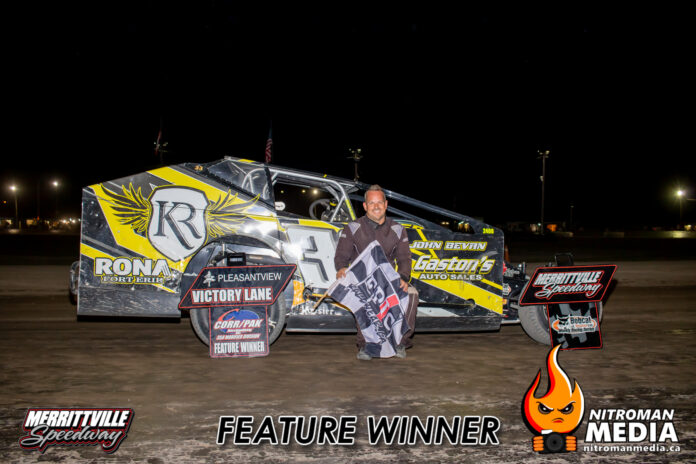 THOROLD, ON –  A fantastic crowd took in a special night of racing at Merrittville Speedway Saturday Night as Bobcat of Hamilton presented School’s Out Night. Gary Lindberg of St. Catharines, On. claimed the win in the Corr/Pak 358 Modifieds. Hamilton, On. native Darrell Farraway visited victory lane in the Right Choice Auto & Leisure Sportsman. In the Rona Doidge Modified Lites, Brent Begolo from Thorold, On. took the win. Rob Murray of St. Catharines, On. won the Hoosier Stock Feature, and Kyle Rothwell of Welland, On. won the Vansickle Pet Valu/PV on the Lane 4-cylinder feature. Following Teddy Shepherd’s win in the School Bus Race, Fireworks illuminated the sky over Merrittville Speedway to close the night.

It was a dominant night in the Corr/Pak Merchandising 358 Modified feature for Gary Lindberg. The raced opened with an incident shortly before the first corner when Chad Chevalier backed it into the fence after a wild ride through the moat. On the restart, Pole-sitter Dylan Davidson, came away with the lead after dueling with Luke Carleton. Gary Lindberg quickly found his way to the front, passing Davidson and driving away from the field. Pete Bicknell emerged from the pack to second, but even as Lindberg encountered heavy lap traffic, Bicknell never got close enough to strike. Lindberg would lap most of the field in a dominating performance, and scored his second win of the year, and first since the season opener. Bicknell held off a late challenge from Williamson, who settled for third at the stripe with Ryan Susice fourth and Brad Rouse fifth.

Jason VanMil and Justin Sharp led the field to green in the Right Choice Auto & Leisure Sportsman feature. On an early restart, Trevor Wright spun from the front row, which collected multiple drivers as the field scattered. Darrell Farraway would eventually pass Justin Sharp, after several laps spent dueling on the restart. This allowed heavy hitters like Cody McPherson and James Friesen to make their way to the top half of the grid. McPherson even completed a pass for the lead on Farraway with 5 to go. However, McPherson got pinned behind a lap car, and Farraway went back around the outside one lap later to steal the win back. James Friesen slipped by McPherson late to take second. McPherson settled for 3rd, with Billy Bleich Jr., fourth and Adam Leslie fifth.

Single car spins hampered the flow of the Rona Doidge Modified Lite feature. Even Josh Sliter who won his heat earlier in the night, would spin twice. Brent Begolo made his way from an eighth starting spot to take the lead from Leroy Buscumb. Begolo survived a single file restart late to win his fifth feature of the season in the Mod Lites. Jeffery May brought it home second, with Buscumb third, Sean Iftody fourth and Tyler Winger fifth.

The Hoosier Stock feature event began with Jim Lampman on the front row alongside Jason Fontaine. Fontaine took the lead early, while Rob Murray set out on a quest for redemption. After failing tech two weeks prior and being disqualified, Murray again showed speed. Murray made quick work of Fontaine and checked out on the field. Dave Bailey was fast but contact with Brad Sheehan forced him to work his way back through the field. Bailey would get back to second, but never close enough to battle Murray for the win. Kraig Handley finished third, Jim Lampman finished fourth and Kyle Pelrine rounded out the top five.

2021 was a dominant year for driver Kyle Rothwell. In 2022, the 96t of Tyler Lafantaise has been the dominant pairing in the Vansickle Pet Valu/PV on the Lane 4 Cylinders. With Lafantaise away, Rothwell piloted the 96t and managed to reclaim some of last year’s magic. He started 14th and drove through the field to score the win. It was the seventh win for the 96 and first for Rothwell in what has been a trying year for he and his team. Austyn Werstoh kept up his consistency finishing. second, Brian Aube finished third in a three wide photo finish, beating Cole Hardy and Ken Hair.

Bobcat of Hamilton Weekly Racing returns July 9th as Merrittville Speedway hosting its annual pre-race Heavy Truck Show N Shine presented by Transport Sales and Service. Those who wish to participate with their truck are encouraged to reserve a spot by calling 905-892-8266. Merrittville Big Scoop will also be serving up $2 small soft serve ice cream to race fans. The Corr/Pak Merchandising 358 Modified’s, Right Choice Auto & Leisure DIRTcar Sportsman, Hoosier Stocks, Rona Doidge Building Centre Modified Lites, and Vansickle Pet Valu/PV on the Lane 4 Cylinders will all be in action. Pit gates will open at 5:00 pm, grandstands open at 5:30, and racing will begin at 7:00 pm.