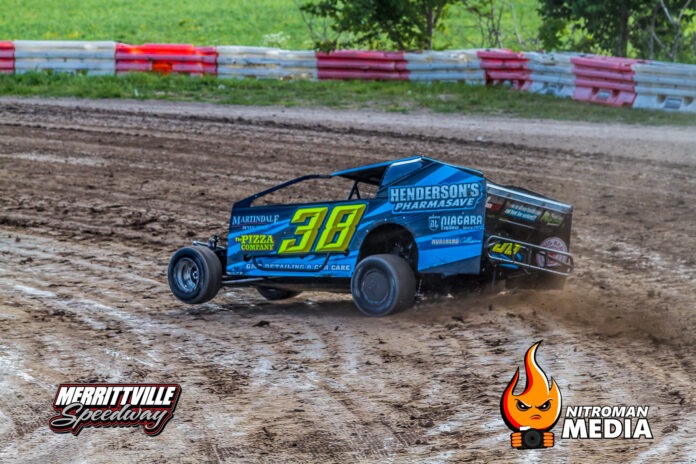 THOROLD, ON – As Merrittville Speedway’s 71st season headed into its points championship finale, there was a feeling that there would be no shortage drama. A wild night of racing was capped off by the 50 Lap John Spencer Memorial Race that would decide the track championship in the Corr/Pak Merchandising 358 Modified’s. Scott Wood of Thorold, Ontario won the John Spencer Memorial Modified feature. Niagara Falls native Nelson Mason won the Right Choice Auto & Leisure Sportsman Feature. Mark Fawcett from Canfield, Ontario grabbed the checkers in the Hoosier Stock Feature. Ridgeway, Ontario’s Tyler Winger finished the year strong with a win in the Rona Doidge Modified Lites and Thorold, Ontario’s Tyler Lafantaisie won the Vansickle Pet Valu/PV On the Lane 4 Cylinders.

Entering Saturday’s action, the tightest points battle was contested in the Corr/Pak Merchandising 358 Modified’s. With point leader Mat Williamson racing elsewhere, Ryan Susice led Gary Lindberg by 10 points and Pete Bicknell by 22 in the standings. Derek VanMil and Tanner Podwinski were on the front row for the 50 lap John Spencer Memorial feature race. The caution waved for the first time when Scott Wood came to a stop after contact on the high side of turn 2. On the restart, all three championship contenders began moving up through the field, with Susice and Bicknell running each other quite aggressively early on. Caution fell again for Podwinski, who came to a stop after contact with Fred Carleton, Podwinski would then be parked after retaliating against Carleton under yellow. Shayne Pierce’s bad luck continued lap 11 when he spun and was hit by Boyd MacTavish. On the restart, Todd Gordon broke a drive shaft and brought the yellow back out for a fourth time. Under green, Gary Lindberg would get to the lead while Susice and Bicknell began making contact with each other while racing hard inside the top 5. This hurt Susice’s car, and he began to fade, while Scott Wood was making a recovery drive through the field. Wood passed leader Lindberg for the lead after another caution at the halfway mark when Dave Flannigan shredded a tire. Lindberg was still second and poised to win the championship by two points until Ryan Susice was able to get by Brad Rouse for sixth position, putting them back into a tie atop the standings. Lindberg would not be able to catch Scott Wood, and Susice did not advance any higher, leaving Wood as champion of the John Spencer Memorial and Lindberg and Susice as 358 Modified track champions.

Cody McPherson came into the points finale already having claimed the Right Choice Auto & Leisure DIRTcar Sportsman track championship, but he still wanted to put on a good show. Matteo Panunte and Trevor Wright started on the front row, and just three laps in, the caution was out when Justin Sharp hit the front stretch wall. Wright led them back to green while Nelson Mason and McPherson began advancing through the field. Cautions came out on lap eight and nine, the latter being a multicar incident. Nelson Mason would take lead on the restart while Wright and Adam Leslie battled it out. McPherson fought his way up to second and on a restart with five laps to go. Seemed poised to put the perfect bow on the Sportsman title. However, Mason was too fast with clean racetrack in front of him, and McPherson would have to settle for second.

Dave Bailey would be the first to tell you that the Hoosier Stock title fight could have been a lot closer if some drivers were able to start all the races. One of those drivers could have been Mark Fawcett, who claimed his 4th feature win on the year at Canada’s Oldest Dirt Track. Fawcett methodically worked his way through the field with Bailey following along as the pair of drivers started on row six. They combined to win 13 of 19 features in the Hoosier Stocks and would celebrate on the front stretch as Fawcett won the race and Bailey won the track championship.

The Rona Doidge Modified Lites title was another championship up for grabs heading into the final night of the season. Brent Begolo led the points by 24 over Josh Sliter while Tyler Winger came into the night with an outside shot at the title. All three found themselves at the front earlier, with Winger capitalizing on starting second to jump out to an early lead. Begolo got as high as second place before not fighting with championship contender Josh Sliter for the position. Even with 10 wins on the season, Begolo had to be conservative and knew third place would be more than enough to win the title. Winger would win his third feature of the season, with Sliter coming home second and Begolo wrapping up the title by finishing third.

On Saturday night, Brent Begolo had to earn his 10th victory of the season. He started on row four alongside Josh Sliter, who chased Begolo throughout the race. There were 5 cautions in the event, including one incident that brought out the red flag, when R.J. Pietz spun off turn 2 and his vehicle flipped on its side after Being hit by Leroy Buscumb. Impressively enough, Pietz would rejoin the race later finishing 14th. While the restarts made things close between Begolo and Sliter, Begolo managed to do just enough to keep his good friend and championship rival at bay. Begolo got feature win number 10, extended his points lead, while Sliter came home second, Rob Misener was third, Tyler Winger fourth and Sean Iftody fifth.

Tyler Lafantaisie didn’t need to win the race in the Vansickle Pet Valu/PV on the Lane 4 Cylinders to claim the track title. In fact, all he had to do was start, but when the car is right, why not go for the win. Lafantaisie and team put in a new motor on race day after having something amiss the night before. Lafantaisie would drive from 11th starting spot to steal the win late from previous week’s feature winner Ken Hair. The win would be the ninth of the season for Lafantaisie and put an exclamation point on a dominant season. 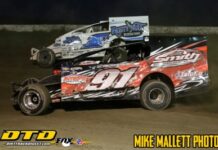