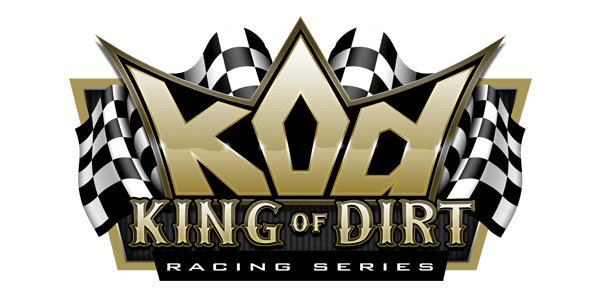 FONDA, NY – Heading into 2017 King Of Dirt Racing announced a major addition to its program in the form of Small Block Modifieds. Thanks to Simplicity Designs there’s one more significant add for the upcoming racing season; a brand new look for the 3rd year dirt track racing series.

When King Of Dirt launched in late 2014 there were a pair of logos used to identify the racing brand. One colored red for Sportsman Modified racing and one colored blue for Pro Stock racing. Despite both logos having a unique design by Adam Zuidema, the logos were recycled and it was time for a fresh new look specific to the series.

“The logos we used were professional and looked great. Adam did a good job on those, but in the back of my mind I always felt they were old and recycled. I finally got the itch to replace them with something specifically made for King Of Dirt Racing, so we put the feelers out there to graphic artists,” said King Of Dirt Promoter Rob Hazer.

Enter Simplicity Designs and owner Ryan Sacco. Among multiple other entries, Sacco responded to the challenge of designing a signature look for King Of Dirt Racing with an entry of his own. It was the fresh new look Rob Hazer was looking for.

“We had several entries and they were all pretty good, but the moment I saw Ryan’s design it had that wow factor I was looking for. I would have never thought gold, but it caught my eye and I knew that’s the one for the foreseeable future right there,” continued Rob Hazer.

Ryan Sacco started Simplicity Designs in 2006 from scratch working on designs part time in the evenings after his full-time day job. He is a self taught designer who began his early days lettering cars out of a 20×15 one bay garage for local drivers near Orange County Fair Speedway such as John Ferrier, Darrel Ford, and Tim Hindley.

“This season I’ve been getting clients from all over including New Jersey, which is nice,” said Ryan Sacco, owner of Simplicity Designs.

One thing many graphic artists loose track of is that feeling of accomplishment in lettering racecars. It’s time consuming and can sometimes be draining, but there’s that one driver who through his reaction reminds graphic designers their work is appreciated.

“Dropping off a body last season for Brian Krummel at Dave Zubikowski’s race shop was memorable for me. I was burnt out, but Zubi pushed me to make it happen and when I dropped off the body the look of excitement on Krummel’s face reminded me these drivers love to race and lettering cars doesn’t have to be a job. It was very motivating for me,” said Sacco.

10 years after starting in a small garage, Ryan Sacco is expanding his workspace to accommodate more race teams. He’s got a family and hopes to offer more services in the near future. One thing for sure, his logo design skills are extraordinary and his effort will carry King Of Dirt Racing into the future.

“I was excited for the new year to click over, which is when we launch the new look for web and social media. The logo Simplicity Designs put together for us will be one we use for years to come. It gave us that fresh look and most importantly it’s brand new and exclusively designed for our series. Many thanks to Ryan for his efforts,” concluded KOD Promoter Rob Hazer.

The KOD Night Of Champions Banquet Party is scheduled for January 14th at the Winner’s Circle Restaurant in Fonda, New York. There will be dinner, dancing, fun, and friends to close out the 2016 season. Also announcements for the 2017 season will first be made at the banquet for those in attendance.