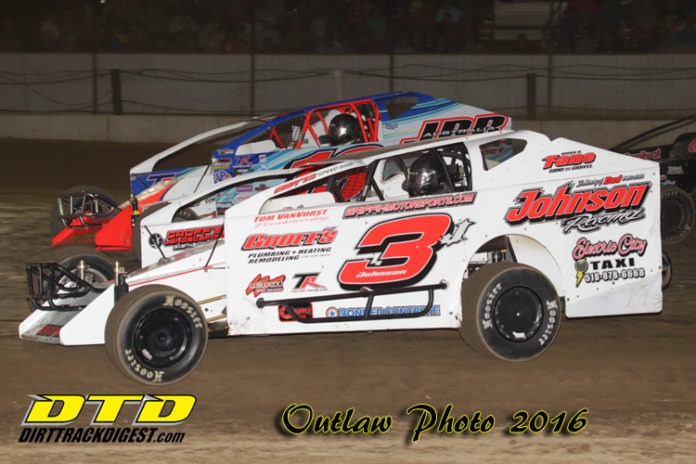 FONDA, NY – After much anticipation, multiple inquires, and some painstakingly patient months the 2017 King Of Dirt Racing schedule is finally set for the Small Block Modifieds, Sportsman, and Pro Stock divisions.

With King Of Dirt Racing pledging never to schedule more than eight races a season per division to keep travel costs to a minimum, the 2017 schedule is rather aggressive in volume of races. Where there is a possibility of 24 races over three division, KOD drivers, fans, and followers will enjoy a record setting 22 races during the summer months for the 3rd year series.

“We have great participating tracks again this year including Albany Saratoga, Lebanon Valley, Utica Rome, Devil’s Bowl, and Fonda. We maxed out both the Small Block and Sportsman divisions at eight races and grew the Pro Stocks to six. I’m pretty excited about it and so are the tracks working with us,” said KOD Promoter Rob Hazer.

The newly added Small Block Modified division will visit five different speedways in 2017 starting with the opener in West Haven Vermont at Devil’s Bowl Speedway on June 13th. This will mark the return of the 358 Modifieds to ‘the bowl’ for a special Tuesday night show, with a rain date of Wednesday June 14th.

Another highlight on the schedule will be rebirthing the Victoria 200 at Utica Rome Speedway on July 9th. In years past this event close to the heart of former track promoter Gene Cole has been a Big Block event. In 2017 however, it’ll feature Small Block Modifieds under the King Of Dirt Racing banner.

“This is going to be a special race for us. For Kim and Bill Shea to offer the opportunity to be part of something like the Victoria race is special and we’ll work with them and marketing partners out West to make it a great experience for drivers and fans,” continued KOD Promoter Rob Hazer.

Other highlights include a trip to the high banks of Lebanon Valley during Tony Stewart’s All-Star Circuit Of Champions 410 Outlaw Sprints night Sunday July 30th, the Tom Clothier Trucking Small Block Nationals to raise awareness for Suicide Prevention and stop bullying on September 8th at Albany Saratoga Speedway, and a season finale at the track of champions Fonda Speedway accompanying the Super DIRTcar Big Block Modified Series on September 23rd.

“I’m very humbled the tracks we work with were so open to helping start this 358 Modified series up. We have some special races this summer and I think the Small Block guys will be pleased. I can’t thank the tracks enough for allowing us to expand and offer this to the drivers,” continued KOD Promoter Rob Hazer.

Once again the Sportsman Modified schedule grew, this time to a max eight-race schedule. The series will once again open at Utica Rome Speedway on May 14th in Vernon New York and then shift to their first ever appearance at Devil’s Bowl Speedway in West Haven Vermont on Sunday May 28th.

Friday Night Lights has belonged to Connor Cleveland, as he won two strait years during that event. This year the champ will have to see if his magic carries over to Tuesday Night Lights, as KOD Sportsman will accompany the Brett Deyo Short Track Super Series at Albany Saratoga Speedway on Tuesday August 15th.

Other highlights on the schedule include the ever-popular Mr. Crate Track USA event at Lebanon Valley Speedway on Thursday August 31st along side the Super DIRTcar Big Block Series and the prestigious Northeast Crate Nationals on Friday September 8th.

“We have a great Sportsman schedule set. With KOD also serving as the DIRTcar East Region for 2017, we’re expecting the competition at each event ot be intense. Every race is important and we can’t wait to get the season started. It’ll be the biggest and best yet for Sportsman Modified drivers,” said Rob Hazer, KOD Promoter.

Full Fender Pro Stock schedule grew to a full six point races in 2017, with the season opener planned for May 14th at Utica Rome Speedway. The series then shifts to Malta New York for a two-race swing at Albany Saratoga Speedway on Friday June 2nd and Friday July 7th.

From there the series heads back to Utica Rome Speedway on August 20th, then off to the valley of speed for another slobber knocker at Lebanon Valley. The season finale for the Pro Stocks will be very interesting and special, as KOD Pro Stocks head to Devil’s Bowl Speedway in Vermont for the Carl Vladyka Memorial 29 lap championship showdown on neutral territory.

“For the first time the Pro Stock drivers will race for a title on neutral territory and that’s pretty exciting. When Mike Bruno and Justin St. Louis asked about doing a race in memory of Carl Vladyka I said absolutely. I watched Super CV race Pro Stocks as a kid. I think the Pro Stock guys are in for their biggest season yet on KOD,” Rob Hazer said.

With the schedule now set and the rules up on the website, it’s only a matter of time before a very busy season of racing gets underway for King Of Dirt Racing.