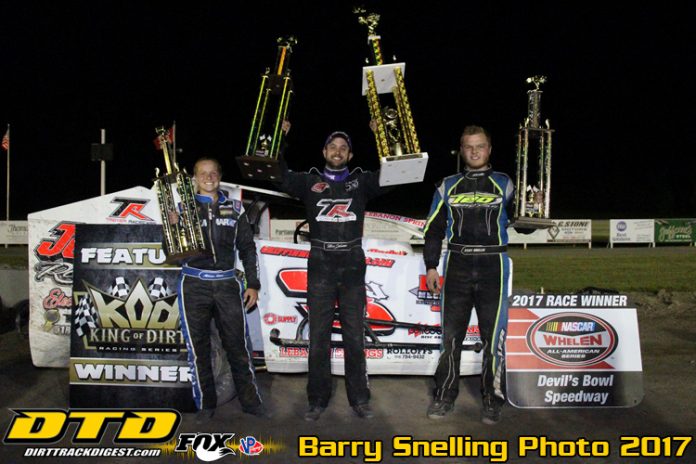 WEST HAVEN, Vt. – Marc Johnson made history on Tuesday, June 13, at The Dirt Track at Devil’s Bowl Speedway, winning the first-ever race for the new King of Dirt Series (KOD) Small Block Modified tour.  “The White Knight” from Guilderland, N.Y., sailed through the 40-lap “Vermont Modified Mayhem” event sponsored by A-Verdi Storage & Office Solutions, to kick off the new series with a $3,000 victory.

Johnson started seventh and navigated his way through limited visibility on a dusty surface in the early laps.  Five caution flags slowed the pace in the first nine laps, but action picked up once the race got into a rhythm and the dust lifted.  Johnson was tested by Jessey Mueller on four restarts in the final 26 laps – including a green-white-checker restart with two laps left – but held his ground up front for the big payday.

Olmstedville, N.Y., driver Mueller, an 11-time winner on the 1/2-mile Asphalt Track at Devil’s Bowl,  ran in second place for most of the race and matched his career-best finish in dirt competition as the runner-up.  Allison Ricci of New Paltz, N.Y., ran inside the top five all race long and parked her Halmar Racing entry on the podium in third place.  Tim Fuller came out on top of a late battle with Kenny Tremont Jr. for fourth place.

Brian Calabrese of Johnstown, N.Y., was a convincing winner in the inaugural 20-lap “Ron Casey Memorial” Shootout, a special non-points race for Sportsman Modified drivers who had not previously won a feature race at The Dirt Track at Devil’s Bowl Speedway.  Calabrese made short work of it, driving from seventh at the start to second place.  Hometown favorite Billy Lussier led the first four laps before the race’s lone caution period, when Calabrese got a good restart and took command, leaving the field behind for the win and the $500 top prize.

Lussier finished second with Jimmy Ryan third.  Lenny Pillsbury and rookie James Fadden completed the top five.  Calabrese, whose car has minimal sponsorship, traveled over two hours with just his brother as his lone crew member.  The family of Ron Casey presented him with the trophy and a commemorative decal.