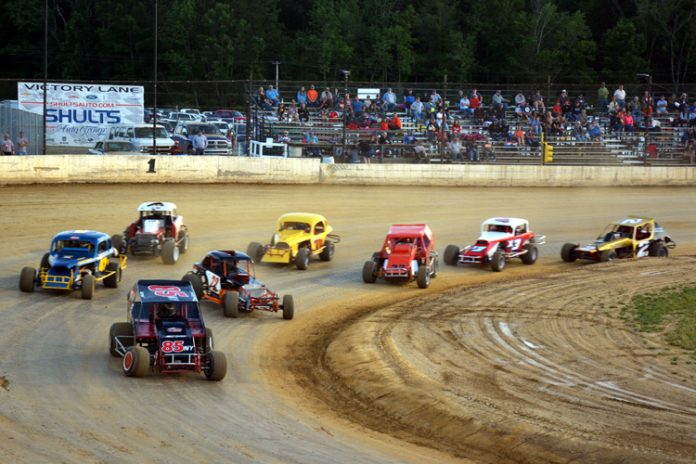 BUSTI, NY- A season high of 14 vintage modifieds joined by the Patriot Sprints, BRP Big Block Modifieds, and Outlaw E-Mods for “Open Wheel Mania” Night at Stateline Speedway.
Prior to the nights racing event, several of the vintage cars were on display at Car-Go Autoparts in Warren, PA. and all 14 cars were on display at the track for all the fans to come check out before the races.
We would like to send out a big thank you to Rich Gutshall of Car-Go Autoparts for sponsoring the nights vintage race and for all the extra things he does for the PA Vintage Modified Club.
Many familiar names returned to the track for the first time this season.  Jim “Dingo” Kirkwood was the hired gun in Duke Wilson’s #2 Brightbill Gremlin.  After taking last season off Rick Majka returned with is orange #33 muddbus.  The winner of the distance traveled award goes to Rob Casti, with his 71e Carl “Fuzzy” VanHorne car.  Rob came all the way from Mahopac, NY to race at the famous Stateline Speedway. Tim Natalino and his father also made their debut for the season, Tim with his new x41 Chevette, and his father in Tim’s old downtube coupe.
Chris Ketch took the modified heat win despite the efforts of Les Myers on the very slick race surface and it was David Myers taking the sportsman heat win, in his now Vega bodied car.
Rick Majka and Kevin “Marbles” Mahoney led the field to the green of the 15 lap feature.  Majka was able to lead the first lap but the always fast Les Myers took the lead away from Majka on lap two.  Myers was able to hold on for the feature win, despite the very slippery track conditions and constant pressure from “Marbles” Mahoney.
At the line it was Les Myers, Kevin Mahoney, and in a drag race to the checkered it was Jim “Dingo” Kirkwood over Chris Ketch, and Rick Majka rounded out the top five.  To complete the Myers sweep of the night.
David Myers, who was battling with some modifieds early in the race managed to drive back to the front of the sportsman field at the checkered, despite being in two on track incidents.  This was David’s third sportsman win in a row, and he has now earned himself a spot on the modified roster for the remainder of the season.
The CarSmile Wiperblades Thunder on the Dirt Vintage series goes from the bullring of Stateline to the big track at Raceway 7 in Conneaut, OH on Friday July 7.  Our complete 17 race schedule can be found on our website at http://pavdma.wixsite.com/pa-vintage-modifieds or follow us on facebook at https://www.facebook.com/ThunderonthedirtVintageRacingSeries/.
Modified Finish – Les Myers x3, Kevin Mahoney 4, Jim Kirkwood 2, Chris Ketch 85ny, Rick Majka 33, Rob Casti 71e, Jim Kurpakus 72 DNF, Terry Suppa 47b DNF
Sportsman Finish- David Myers 89,  Dale Zimmer 62, Gary Beers 71, Tim Natalino x41, Jeff Mitchel 72m, Tim Natalino 41 DNF
Heat Winners- Modified Chris Ketch 85ny Sportsman David Myers 89