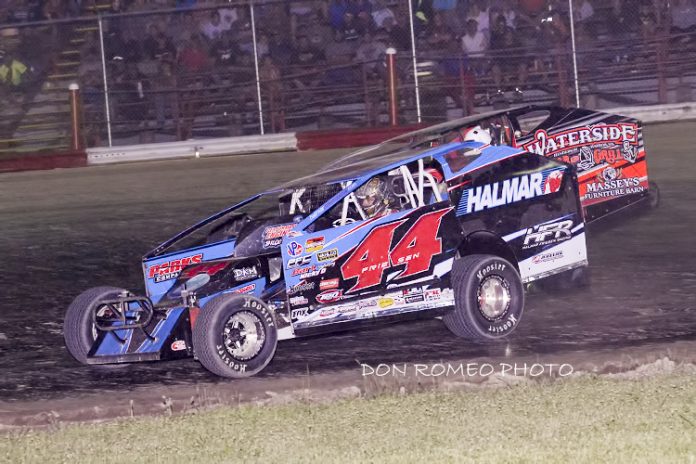 VERNON, NY – Stewart Friesen returned to Utica-Rome Speedway’s victory lane on Sunday, dominating the second half of a crazy New Yorker 100 for the Super DIRTcar Series. The win is Friesen’s first on the Series tour since last summer, and extends his all-time win record at the Vernon oval to 54.

Defending track champion Matt Sheppard led the strong field of 30 Modifieds to the green, jumping out to his familiar position at the front of the field. Billy Decker didn’t let Sheppard get far away, hanging steady within ten car lengths and occasionally drawing within two. As the duo raced through thick lapped traffic, Decker was able to pounce and snatch the lead away from Sheppard as lap 37 was completed. Just one lap later, Sheppard brought out a caution with a flat right front tire, forcing him into the pits and to the rear of the field, where he restarted in 21st.

When the race resumed with 45 laps in the record books, Pat Ward snuck by Billy Decker to lead his first laps on the Series this season. Decker then surrendered second to Stewart Friesen, who in turn rode the far outside of the slick surface to the lead on lap 54. A lap after Friesen took the lead, Alan Johnson slowed with mechanical issues to draw the second yellow of the evening. Friesen took command once more when racing resumed, holding a small but consistent advantage over Pat Ward. The third stoppage of the race happened on lap 74, this time a red flag rather than a yellow, as Claude Hutchings rolled wildly down the backstretch. Hutchings climbed from the wild wreck uninjured, and the green flag waived once more. Another yellow waived with 86 laps completed as Nick Webb spun off the top of turn four.

Matt Sheppard and Larry Wight both pitted early on in the event, and both drivers had charged through the field together, reaching seventh and eighth before the yellow for Webb. The pair had been battling ferociously, swapping spots and racing door to door for many laps prior.


On lap 88, the two cars came together at the midpoint of the backstretch, spinning Sheppard and launching Wight into a hard, high-flying flip. The two drivers emerged from their destroyed cars under their own power, but both quickly went to the ground as Sheppard and Wight briefly scuffled. Once the fight was broken up and the wreckage cleaned up, Stewart Friesen once again took command at the front of the field, pulling away from Pat Ward to claim his first Utica-Rome win since 2015. Tim Fuller charged to third, while Danny Varin placed fourth to complement his second place run in the ESS main earlier in the evening. Billy Decker slipped to fifth, while Brett Hearn claimed sixth.

“What a race car, wow! This Halmar team has worked so hard to get better on these slick tracks, and here we are,” said a very excited Friesen. “It was tough going there, Matt (Sheppard) has this place figured out, and he was so fast all night, but that one caution came out and he wasn’t there, so I was just like ‘alright, that makes our job a little easier.’ We had this place figured out on American Racers, but with the switch to Hoosier it’s been tough for us to find a balance, but I think we got it now.”

Modified heats were won by Wight, Sheppard, Fuller, and Friesen, with Rob Bellinger and Keith Flach winning the consolations. Mark Effner led all the way in the 20-lap Sportsman feature, holding off AJ Miller to claim his first win at the track since moving over from the Pro Stock division.