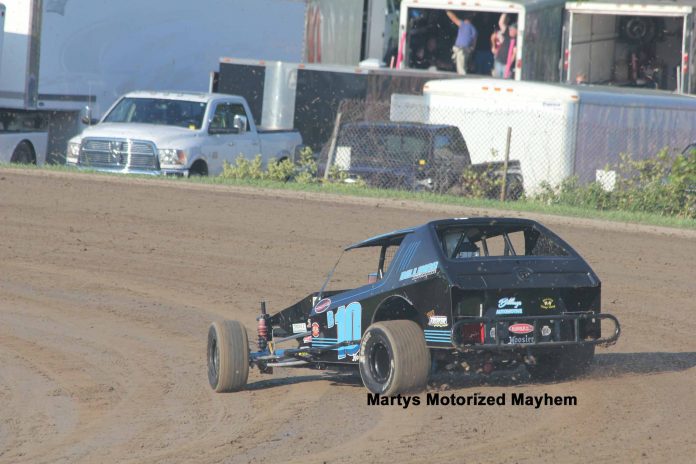 But for the first 14 circuits of the 15 lap affair, point leader Nathan Berry looked to have his first ever feature win sewn up in his Solid Rock Pinto bodied 14B. Berry jumped out to the lead from his pole starting position and took command for the first 14 circuits. Behind him Matt Barbour and Paul Billings swapped the runner up spot back and forth with Denzil Billings Jr and Brandon Gregory in tow.

A caution on lap 14 for Brian Comeau would change the channel.

The green/white restart would see Gregory loose the handle in turn one and spin to the infield while up front Barbour would get into Berry on turn three resulting in the cars hooking together. Both were sent to the infield where the cars would untangle. Berry would hammer the gas with the flag waving only 100 feet away but would watch helplessly as the B10 of Billings would sail by on the high side, margin of victory about half a car. Billings Jr. Would cross the line third with Barbour recovering to place fourth and Tyler Reynolds would round out the fast five.

Peter Stapper would place 6th in track position but would claim the checkers for the 50’s, 60’s class. Stapper is batting 1000% this season with 3 victories in three starts. In doing so he may have left a few of the supposedly faster, lighter 70’s, 80’s entries scratching their heads.


Pit notes…Brandon Gregory making his first appearance this year with the club…Brian Comeau having a tough night with multiple issues throughout the feature…Tyler Reynolds with carb issues all evening…the Club returns to action August 18th at the Mohawk International Raceway. 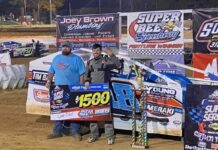