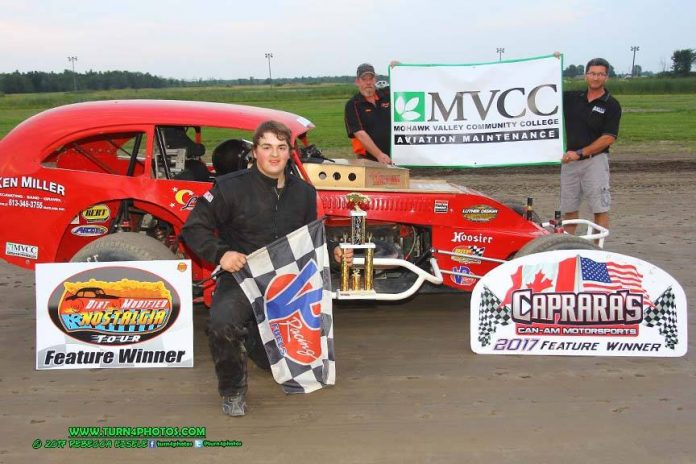 LAFARGEVILLE, NY – Matt Barbour and Darrell Wilson will be the trivia answer in years to come after capturing their respective classes here at Caprara’s Can Am Speedway this past Saturday night.

In a night of firsts, Barbour, from Brockville, On, would wheel his Ken Miller Excavating/Luna Pizza #37 machine to the Modified division win after a lengthy battle with wily veteran Paul Billings. Barbour would start outside pole with the Billings Automotive, B10 in the number one spot. It would be Billings leading the first circuit around the ½ mile oval but Barbour would storm back to lead laps two through fifteen. Billings would challenge throughout, showing the rookie a wheel on occasion but Barbour would click off the laps, hitting all his marks in a near flawless performance capturing his first ever vintage Modified feature. Kingston, On native John Stanley would finish a close third with David Charczuk of Lewiston, NY coming home fourth. Tyler Reynolds from Lyn, On would complete the fast five.

Darrell Wilson of Kemptville, On would put his Buzzie Reutimann tribute car into the Nostalgia division winner’s circle in his first taste of victory behind the wheel of a vintage modified as well. Finishing sixth on the field Wilson would outduel Tim Charland and Tim Hegarty for the victory.

Next week the series heads to Airborne Park Speedway in Plattsburgh, NY.

Pit notes…Mohawk Valley Community College on hand with a display for their Airframe and Powerplant Technology program…Suzi Roy from Oxford Station made her debut in the #Q36 Ford Falcon bodied machine…Denzil Billings Jr would see a driveshaft let go ending his night early, a DNS in the feature…Megan Ciglich would see her debut night end early after tagging the retaining wall in turn four…Matt Larrivee looked strong in the Tom Belewich #22…Charczuk making the 4 hr haul from Lewiston, NY…Pat Charland getting more and more competitive in his #42…Paul Billings and Tim Hegarty would claim heat race checkers… 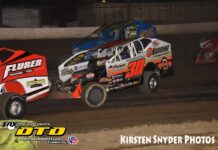