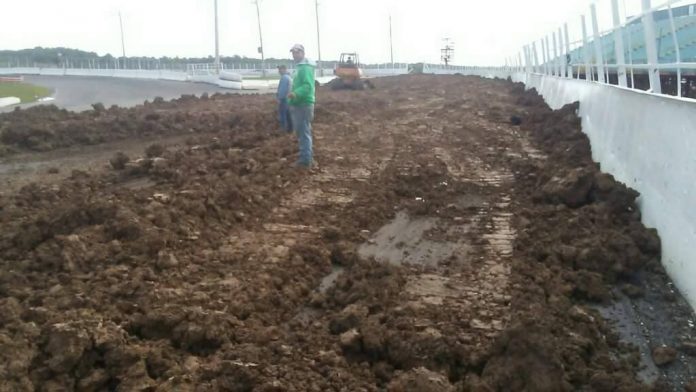 CONCORD, NC – As soon as Oswego Speedway closed its doors on the 2017 season last week, DIRTcar Racing crews began the arduous task of once again taking the historic speedway back to its dirt-racing roots, transforming the Steel Palace to a Clay Palace for Racing’s Biggest Party. For the second straight year, Oswego Speedway will host NAPA Auto Parts Super DIRT Week from October 1- 8, 2017.

This year, officials gained access to the facility two weeks earlier than last year in order to prepare a better racing surface and ensure the best NAPA Super DIRT Week ever.

Last week crews got busy skirting the asphalt with jersey barriers to increase the height of the famous inside steel wall. Then, during the weekend, multiple truck-loads of mulch were laid down over the asphalt track to preserve the racing surface, help with necessary drainage, and simplify the impending clean-up process.

Next, crews will dump nearly 9,600 cubic yards of clay on the track – close to 600 truckloads – before the transformation is complete.

When it was determined that Racing’s Biggest Party wouldn’t be returning to the New York State Fairgrounds at Syracuse, DIRTcar Racing crews were left searching for a new venue for one of New York’s biggest racing events. The location and size of the facility – the seating capacity and 86-acre grounds – made Oswego Speedway one of the most viable options. Just up the hill from Route 104 and a mere 30 miles from the original home of NAPA Super DIRT Week, the speedway is traditionally a 5/8th-mile asphalt oval.


One of the biggest challenges for the DIRTcar Racing team was the transformation of the Steel Palace into the Clay Palace. After months of planning, crews went to work. Workers scattered across the grounds of the Speedway throughout the late-Summer months preparing for the thousands of fans that would make their annual pilgrimage to Central New York for the area’s largest Big-Block Modified event. Renovations included new roads, 90 full-amenity camping spots, refurbished grandstands, and of course, the racing surface was covered in clay.

This year, with two extra weeks to prepare the surface, DIRTcar Racing aims to serve up the best NAPA Super DIRT Week ever. The week will kick off with early parking for campers on Sunday, October 1. Early Bird tech inspection for all classes and competitors starts on Monday, October 2. On-track activities will begin shortly after the procession of cars through the streets of Oswego on Wednesday, October 4 at roughly 12 p.m. And the Billy Whittaker Cars 200 is scheduled to begin at 2 p.m. on Sunday, October 8, with opening ceremonies at 1:30 p.m.