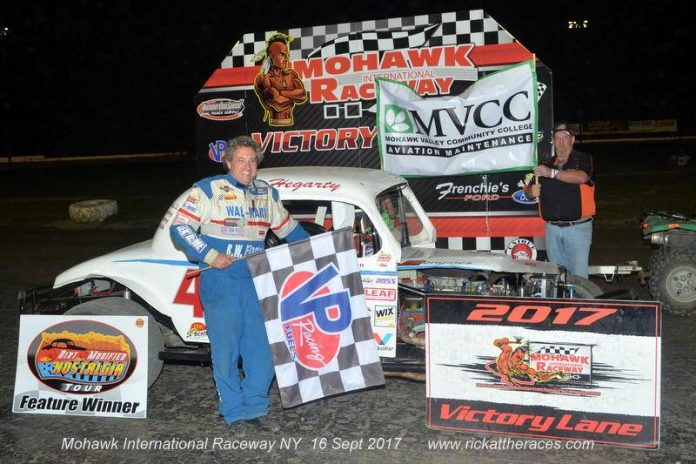 AKWESASNE, NY – The Dirt Modified Nostalgia Tour wrapped up it’s inaugural season this past Saturday night at the Mohawk International Raceway in front of a huge crowd as part of the tracks season finale, the Mohawk Nationals.

The Kingston Krew, John Stanley & Tim Hegarty entered the evening both spotting their respective division leaders, Tyler Reynolds and Matt Larrivee 5 points. Stanley would race his way to the Modified Championship finishing 3 spots ahead of Reynolds while Hegarty would capitalize on Matt Larrivee’s misfortune after the MVCC Tom Belewich entry would experience mechanical issues with only a handful of laps to go.

Paul Billings of Merrickville, On was not interested in points this night, he was after his first Mohawk feature win.But in the early going it was all Nathan Berry as he had his Loud & Dirty Brand/Snap On Tools 14B purple Pinto out front until a caution for Megan Ciglich would bunch up the field.

The restart would see Stanley use the high side of the track to power by Berry and it looked like the blue #2 would celebrate his Championship in victory lane. However only a couple of laps later Cory Winters would see his right front hub fail on his DirtCarParts.com #33 bringing out the second and final caution of the evening.

Billings would dive to the bottom going into turn 3 and take command on lap 12 and go on to take the checkers. Berry would slip by Stanley for second, Can Am winner Matt Barbour would finish fourth with Denzil Billings Jr. rounding out the fast five.

With 2017 in the books the DMNT has already begun putting together it’s 2018 schedule with some surprises announcements coming soon.

The DMNT would like to thank Tom Belewich, Walt Constantini and the Mohawk Valley Community College Airframe & Powerplant Technology for partnering with us in 2017.

Pit notes…Stanley and Larrivee would claim heat wins…David Charczuk making the 5 ½ hour tow to Mohawk International…Larrivee would see his Championship hopes dashed with 2 to go as the car picked up a terrible vibration…first ever feature win for Hegarty…Berry and Winters making their DMNT debut…Series saw 21 different drivers participate over four races throughout central and northern New York State…Reynolds throwing everything at the car including the kitchen sink between the heat and the feature, brother Evan will take over the driving chores on the vintage ride with Tyler moving back into the Sportsman division next year…was good to have Mike Verbeek back as Race Director after his recent health issues…Brian Hegarty helping the series out as guest scorer for the evening…Special thanks to Ryan Hegarty, Cheryl Murphy, Crystal Reynolds and Christine Ciglich for all the behind the scenes work throughout the year.