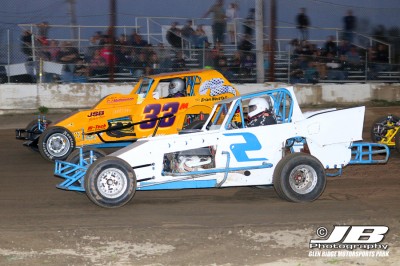 The Dirt Modified Nostalgia Tour and The Mohawk Valley Vintage Dirt Modified Series are pleased to announce a common rules package for both in 2018. The move should see some stability brought to the vintage scene across a large section of New York State.

It will also allow both series to run some combined events at various tracks increasing both the competition level and car counts while offering fans and track promotors better value. “We wanted to increase our car count levels” explains MVVDM Series Director Jay Severson. “So when we saw the opportunity to adopt a common sense rules package and team with the Nostalgia Tour, we made what we feel was the best decision and direction for our series”

The Holley 4412 two barrel carburetor is a big part of equalizing the competition with various weight breaks for crate or spec engines in the Modified division. It also reduces the speed discrepancy between the other class, the Nostalgia division which consist of mostly stock oem frames.

With crate engines readily available both series will be looking to recruit new drivers, some of which may have gotten out of racing due to cost, others due to time commitments. Either way, interested parties now have a wide area stretching from the Capital District, through Central and Northern, NY State. If so inclined they may even venture into Eastern Ontario where essentially the same rules are in effect.

“We are promoting a safe, affordable class of racing which pays tribute and honors our historical roots here in the Northeast” remarks DMNT Technical Director Derrick Flynn. “We know there are vintage cars parked due to the vast speed discrepancies between competitors in other organizations. Part of our sustainability is that you can spend around $5,000 for a complete car and be competitive. You won’t be racing against 500 plus horsepower vintage cars”


The joint venture is already paying dividends with both series having their season finale at Afton Motorsports Park next October as part of the American Racer Short Track SuperNationals 11. DMNT Series Director Jeff Ciglich explains “This one is a big deal for both series, it will be a chance to showcase both brands in front of a huge crowd. We hope to put on a great show for not only the fans but Brett Deyo who we would like to thank for this great opportunity”

In addition, both series will be honoring the others memberships at all events. A MVVDM license holder will be able to attend a DMNT event without purchasing a DMNT license. The reverse will be in effect for DMNT members and MVVDM shows.

For more information on the DMNT please visit our website @ https://www.dirtmodifiednostalgiatour.com/

For more information on the MVVDM please visit their facebook page: https://www.facebook.com/movalvdm/?ref=br_tf