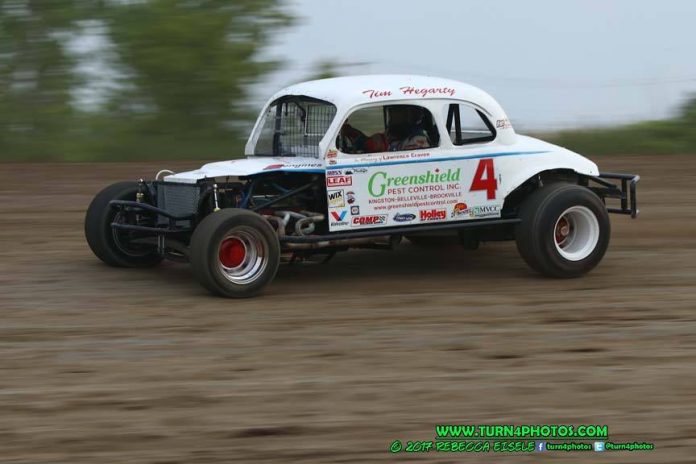 Tim Hegarty of Kingston, Ont will be back in his familiar number 4 sponsored by Greenshield Pest Control of Kingston, Ontario, the Kingston Collision Centre, Get Smart Storage and of course Shaw Insurance both of Kingston as well.

Bob Shannon raced the machine from 1971 to ’73 at both the Brockville and Kingston Speedways. These were the years that saw it raced competitively as the car had a few different owners up until it last saw action in 1975.

The current body is a 1939 Chevy coupe that Tim and his brother Chris found at a local auto wreckers in 2006.


The motivation behind restoring the vehicle wasn’t for racing purposes. Initially the car was to be a display piece for a Kingston Speedway reunion in June of 2007.

“Last year was a lot of fun” Tim said “I loved Airborne, such a top notch facility, it reminded me of an old Nascar track from the 60’s. A great atmosphere, paved pits, well run, I am definitely looking forward to going back this season”

Tim loves to go to new tracks “It’s why I have a vintage car, love seeing new places, meeting new racers. It was fun to see some of the old Mid State guys when we went to Paradise last year. That was another first time track for me and they treated us so well there, I am happy to see we will be there twice this year. Plus we have a great group of guys, Johnny (Stanley), Dave (Charczuk), Tom and Matt (Larrivee) and of course Jason Reynolds and his crew, such great people. I hope we will be seeing a few more coming on board for the whole series”

There is one small disappointment for 2018, the DMNT was unable to secure a return date at the Can Am Speedway. “I loved racing there, hopefully something can be worked out for 2019” Tim adds.

“Hopefully we will see more of the old cars come out this year, I know at Paradise there will be separate features for the two divisions, this is a great opportunity for those with the older machines to really have a lot of fun”

Hegarty is excited about the 2018 schedule “Only nine races, three back to backs and a lot of new tracks I haven’t raced at before. Outlaw, Land Of Legends, Utica Rome and Afton are all new and of course going back to Paradise, Airborne and Mohawk, all great places, it will be lots of fun.”

Tim would like to thank his wife Cheryl, “For letting me race” he chuckled, son Ryan who helps with the car in the pits on race day as well as Darren Frasso, Neil Candy and Randy McGlynn for their help during the course of his career over the years.