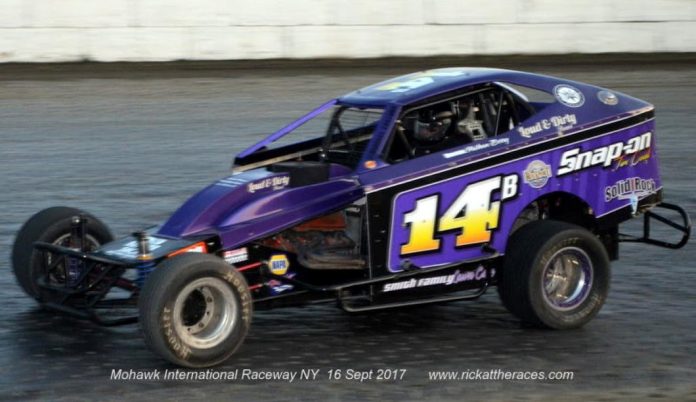 ATHENS, ONT – Nathan Berry joins the Dirt Modified Nostalgia Tour full time in 2018 with his eye on the Modified title and a chance to race at some exciting new venues.

Berry is coming off a successful 2017 campaign which saw multiple feature wins, including the Applefest weekend in Brighton, Ontario, the All Canadian “A” feature at Humberstone and the Modified Championship with the Eastern Ontario Club.

But winning races and titles isn’t the sole reason for running a vintage car. “ I get to spend time with Dad” explains Berry, “I started racing karts when I was 14 and ever since the racing has allowed us to spend time together”

Looking ahead to the upcoming season Nathan has circled June 2nd at the Land Of Legends and August 5th at Utica Rome as the ones he’s most looking forward to. “Although I think Dad is more excited about Canandaigua. I’m also looking forward to returning to Paradise with a bit bigger car” Berry has competed at the Paradise Speedway with his kart a few years ago with former DMNT driver Tyler Reynolds.

For his part, car owner Dave Berry is looking forward to a drama free season. “There was a lot of background noise last year and a lot of politics. We’re excited to run this series, see some new tracks, race with John Stanley and Dave Charczuk and of course the Reynolds.”


When asked about the possibility of taking a run at two Championships in 2018, Nathan admits he hadn’t really thought about it “I did see the Brockville Speedway schedule and yes it will be possible to try for both” in reference to the Outlaw Vintage division run bi-weekly there. “It’s presents us with an opportunity” adds Dave, “But we’ll probably take it once race at a time and just let the chips fall where they may”

The Chico Dingwall prepared Pinto bodied Bicknell will get to run at the 2350 lbs weight rule as the car is built to DMNT spec. “Our car is a 1999 Bicknell chassis but we work a lot on our car” Dave explains “There was a lot of grumbling at Humberstone about shocks and modern chassis by guys running 600 horsepower. We were led to believe that event was where the best of the best in vintage racing got together and that it was a real big deal. Instead I saw a lot of wrecked cars, disorganization, and yeah, we won the race but if I didn’t put Nathan’s picture on facebook nobody would have known.”