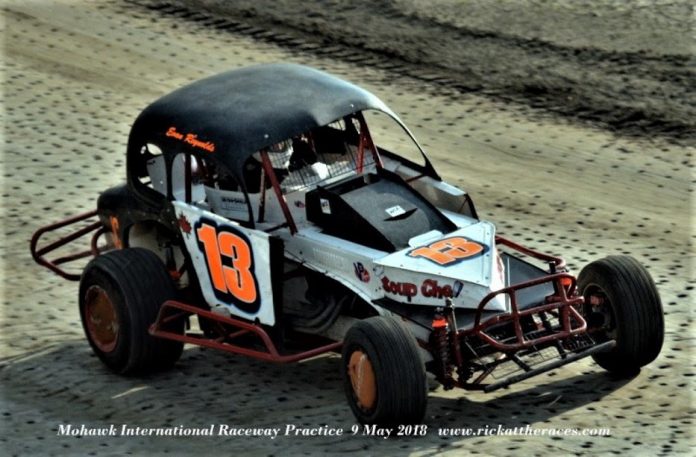 HOGANSBURG, NY – After what seemed like a winter that would never end at long last the DMNT Vintage Modified Series will finally see cars hit the track in 2018.

It begins where the 2017 season ended, at the Mohawk International Raceway. Current Champions John Stanley and Tim Hegarty, both of Kingston, Ont are back to defend there titles in 2018. Both will see very stiff competition this season. Hegarty will once again have Forestport, NY native Matt Larrivee to deal with for the Nostalgia Division crown while Stanley will have to contend with 19 year old Nathan Berry of Athens, Ont. who will be gunning for the Modified Championship this season.

Brockville, Ont native Matt Barbour and Josh Powers of Addison, Ont will be looking for a checkered flag this Friday in the Modified ranks. Megan Ciglich returns to pilot the 19 machine and Evan Reynolds makes his vintage modified debut aboard the family owned number 13 entry.

Also expected to compete in the Nostalgia division will be Tony Kamburelis towing all the way up from Fort Ann, NY with his 1937 Ford Sedan.


The 2018 edition of the DMNT is brought to you by: CARtoons Magazine, MVCC Airframe & Powerplant and Shaw Insurance.