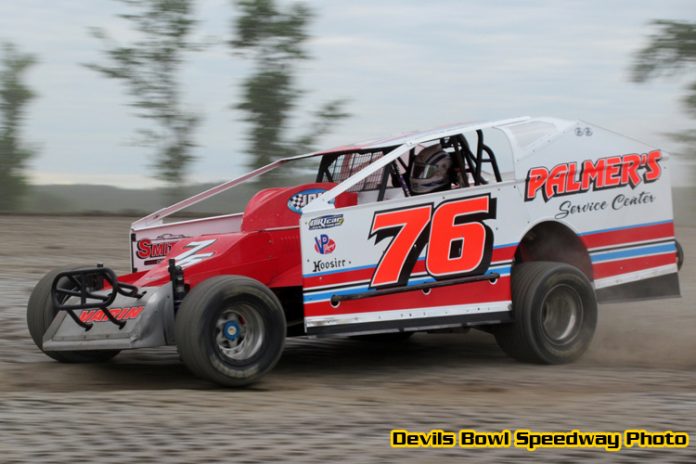 WEST HAVEN, VT – There wasn’t much left for dirt Modified stock car driver Bobby Varin to check off on his list of accomplishments, but winning at Devil’s Bowl Speedway was one of them. In fact, the legendary racer had never seen the Vermont track until Wednesday, June 6, but he went home to Fonda, N.Y. with the winner’s trophy and a check for $2,500.

Varin topped the A-Verdi Storage Containers 40 at the special mid-week event for the King of Dirt Racing (KOD) Small Block 358 Modified Series, the series’ season opener. A racy surface and an interesting mix of big-horsepower 358 cubic-inch engines and smaller “602” Sportsman crate engines created passing and action throughout the field. Young gun Jeremy Wilder set the pace from the pole position for the first 18 laps, but Fonda Speedway legend Varin powered by him on the outside lane at lap 19 and set sail for the remainder of the race.

Several good battles for position kept the race entertaining, first with Varin and Wilder, then with top Canadian runner Steve Bernier and defending KOD champion Marc Johnson, and Sportsman drivers Joey Scarborough and Justin Comes, among others. Demetrios Drellos, Don Ronca, and Frank Hoard III each made big moves up through the field, with Hoard and Comes running the extreme outside lane to get their work done.

At the finish, it was Varin, Wilder, Johnson, Bernier, and Drellos in the top five positions. Matt DeLorenzo finished sixth, followed by Ronca, Jessey Mueller, Rocky Warner, and Hoard. The win was Varin’s third-straight in KOD Small Block 358 Modified competition, dating back to the final two races of 2017.

“I was on a radio show Monday night and everyone was talking about Devil’s Bowl,” an excited Varin said in victory lane. “It sounds like Mike Bruno and his staff put a lot of work into it and it sounded like fun, so I called up my car owner, Alton Palmer, and I said we ought to go. I’d never seen the place before tonight, and I had a blast out here. And the A-Verdi people supporting racing as much as they do means a lot. We can’t do this without them.”

In NASCAR Whelen All-American Series support division action, Travis Billington of South Glens Falls, N.Y., won for the second time in the 20-lap O’Reilly Auto Parts Limited Sportsman race. The 16 year-old needed just six laps to work from the seventh starting position into the lead. Paolo Pascarella finished second to continue his strong start; Billington and Pascarella have each finished first or second in all three events so far.

Josh Rozelle, John Stowell, and Joey Roberts finished in tight formation after a late-race battle. Rozelle had his best effort of the young season with a third-place finish; he zipped from fourth at the start to lead the first five laps. Stowell finished fourth in his first Devil’s Bowl appearance and Roberts took fifth. Adam Piper, Brent Warren, R.J. Germain, Jason Baker, and Jamey Ferland rounded out the top 10 in order.

Chris Murray won what was perhaps the most exciting race of the night, taking the 20-lap Super Stock event. The Fair Haven, Vt., racer was electric in the high outside groove, pushing the limits of both his car and the track surface. After spinning out early after jumping the cushion, Murray marched forward to stage a late-race fight with Scott FitzGerald and Bill Duprey that lasted for 10 laps.

FitzGerald and Duprey committed to running the very bottom lane while the broad-sliding Murray sailed around the top, waging a back-and-forth three-way battle that was measure in inches rather than feet. At the line, it was Murray taking his second win of the year, followed by FitzGerald, Duprey, Josh Bussino, and Lou Gancarz.

Mike Lique of Lebanon, N.H., was a first-time Devil’s Bowl winner in the 15-lap Portland Glass Mini Stock feature. The four-cylinder racing veteran led every lap from the outside pole starting spot, then held off a charging Chris Conroy after a restart with four laps to go. Conroy finished second for his first podium run of the season, and former Lebanon Valley Speedway champion Brandon Ely finished third. Shawn Moquin and Tim Simonds were fourth and fifth, respectively.

All five weekly divisions will be on the program including the Sportsman Modifieds and 500cc Mini Sprints, as well as the season’s first Bandit Youth Mini Stock race. Regular general admission is $12 for adults, $10 for seniors, $5 for teens (13-17), and free for kids age 12 and under. Racing starts at 5:00 p.m.