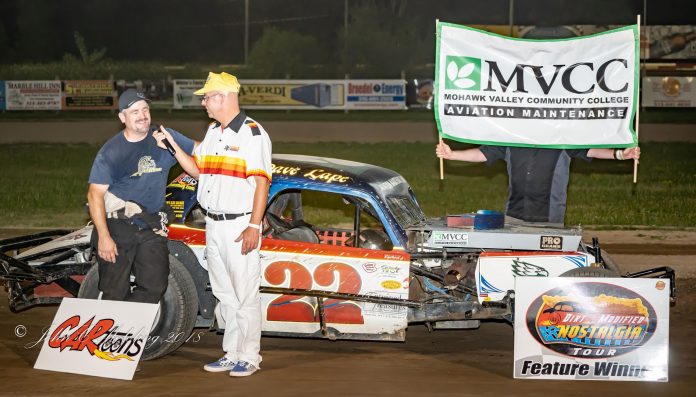 Vernon, NY – The Dirt Modified Nostalgia Tour made it’s first ever appearance to the Utica Rome Speedway this past Sunday night and when the dust had settled Athens, On native Nathan Berry and Matt Larrivee of Forestport, NY claimed feature wins in the Modified and Nostalgia divisions.

Berry wasted no time blasting into the lead by virtue of his pole starting position with defending champ John Stanley in tow. Within several laps Berry would begin to extend his lead in the 15 lap green to checker affair as Stanley would have to contend with Bob Johnson of Horseheads, NY. Evan Reynolds would run a strong fourth.

While Berry was checking out on the field the battle on the track was for the Nostalgia class win. Defending champ Tim Hegarty of Kingston, On had his hands full with Phil Claussen the night before at Paradise Speedway, falling short in the runner up position. Old nemesis Matt Larrivee provided the competition on this night with the pair swapping the lead at least a dozen times. Hegarty would bobble on the final lap giving Larrivee the win in the Nostalgia class.

Roman Empire…Larrivee’s victory ties him with Hegarty at 2 a piece for the season…Berry ties John Stanley at 2 as well with his weekend sweep…heat wins went to Berry and Hegarty…Chip Gauthier from Hartford, NY and Greg Hixson of Newark, NY made their debuts with the series…Utica Rome flagger Scott Hixson begging DMNT Race Director Mike Verbeek to black flag father Greg Hixson “at least once”…Jim Olin filling in for Jay Severson as the voice of the DMNT quite nicely, hopefully we will see Jim again with us in the future…Bob Johnson with 3 consecutive thirds over the last three events…83 green flag laps over the weekend with Paradise and only 2 cautions on the entire season thus far…The series takes a week of then heads north for another back to back weekend with Mohawk International in Hogansburg, NY and Airborne Park Speedway in Plattsburgh, NY.