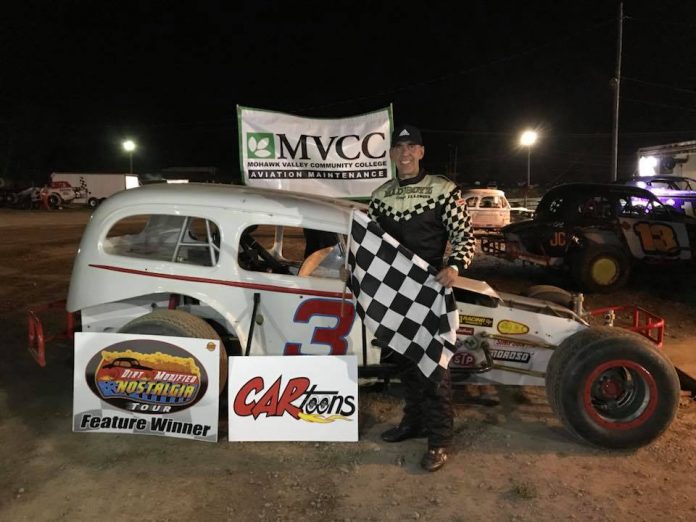 GENEVA, NY – The Dirt Modified Nostalgia Tour returned to the tight confines of Paradise Speedway this past Saturday night with both divisions seeing new faces in victory lane.

In the 20 lap Modified division feature, Nathan Berry of Athens, On claimed his first win of the season over rival John Stanley and Bob Johnson of Horseheads, NY after Jon Kuleszo failed post race tech. Evan Reynolds and Megan Ciglich would complete the field.

The 20 lap Nostalgia feature would be a real barn burner with defending champ Tim Hegarty of Kingston, On giving chase to Dr. Phil Claussen of Oakbrooke, IL for the entire feature. The pair would weave throughout lapped traffic on numerous occasions but Hagerty would not be able to get by. Jeff Mitchell of Avoca, NY would take third.

Paradise Ponderings: Phil Claussen and Ed Lawrence seeing action with the DMNT for the first time this season…Ciglich would turn her fastest laps so far with the series…Brad Litzenberger returned to run some more laps…Heats went to Jon Kuleszo and Tim Hegarty…the series would like to thank Gary Palone and Bill Glitch for their hospitality this year, we look forward to returning in 2019.