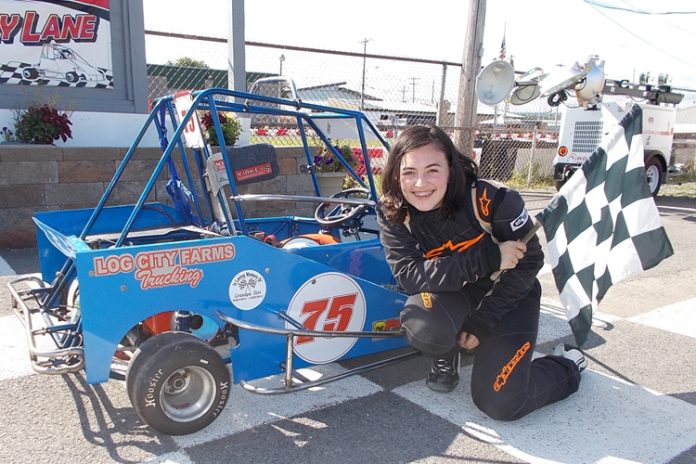 LIVERPOOL, NY – The Dirt Modified Nostalgia Tour is excited to announce that former Syracuse Microd Club driver Allie Elkins will be behind the wheel of a DMNT Modified in 2019. The 15-year-old Liverpool, NY native is expected to run the entire tour in car prepared by DMNT Technical Director Derrick Flynn and long time vintage racer Pete Stapper, both of Brockville, Ont.

“I am beyond excited, this is one of the coolest things that’s ever happened to me. It’s been my goal to always be in a dirt race car. I’ve heard a lot of great things about the DMNT, I’ve been to some of the Nostalgia Tour races, they’re really, really cool. I so want to be a part of that, the cars are so cool looking, every car is unique. I am so excited to be a part of it.” explains Elkins.

A sophomore at Liverpool High School, she has competed in a Microd the past two years for the Kuleszo Racing Team based out of Romulus, NY. This past season she finished second overall with 2 feature wins and a couple of heat race victories. She finished third in her division last year in the Syracuse Indoor Championship driving for car owner Kevin Ward. It was her first and only time in a go-kart as part of a multi-kart team. One of her teammates was Sprint Car driver Denny Pebbles.

Growing up in racing Allie’s goal was always to be a race car driver. Getting her feet wet on “Try A Quarter Midget Day” back in 2016 at a local club, the racing bug bit her hard. She was hooked up with the Kuleszo’s on a reference from racer Frank Doll Jr.

In addition to racing she has made a name for herself as an anthem singer, performing at Five Mile Point, Brewerton, Fulton, Can Am and Land Of Legends Raceway. She also plays the violin, basketball and bowls. “Everything she does, she does to do well” remarked Allie’s father, Doug Elkins.


The series will also have Doug Elkins helping out the series doing interviews with the driver’s for Doug’s Dirt Diary and announcing for the DMNT at the tracks when possible.

After a four race mini-series in 2017 at Can Am, Mohawk, Airborne Park and Paradise, the Dirt Modified Nostalgia Tour saw it’s schedule expand with new tracks Outlaw, Utica Rome and Land Of Legends joining Paradise, Airborne and Mohawk in 2018.

The DMNT is a unique brand of racing with two separate divisions, both of which pay homage to the Northeast Dirt Modifieds historical roots. The Nostalgia class consists mostly of authentic oem framed coupes and coaches, restored to their former glory featuring six cylinder, flat head and small block Chevy’s, Ford’s etc. The Modified class utilizes a more modern chassis such as Bicknell, Troyer, Teo etc with steel Gremlin, Pinto, Coupe, Coach, Vega etc bodies to replicate the cars of the 70’s and early 80’s. Mud bus style cars mounted on period correct 80’s chassis are also permitted to compete with a weight penalty. Engines are restricted to small blocks with a 2 barrel carburetor. The series features full on competitive racing and keeps track of points earned to award the top point getter in each division the DMNT Championship.

In 2018 the series saw over 30 different cars compete with drivers from across New York State and Ontario. Athens, Ont native Nathan Berry claimed the Modified Championship while Tim Hegarty of Kingston, Ont successfully defended his title in the Nostalgia class.

The series will once again look to expand it’s schedule in 2019. With it’s tight, common sense rules package series officials believe it is the most cost effective way for anyone looking to go open wheel racing.