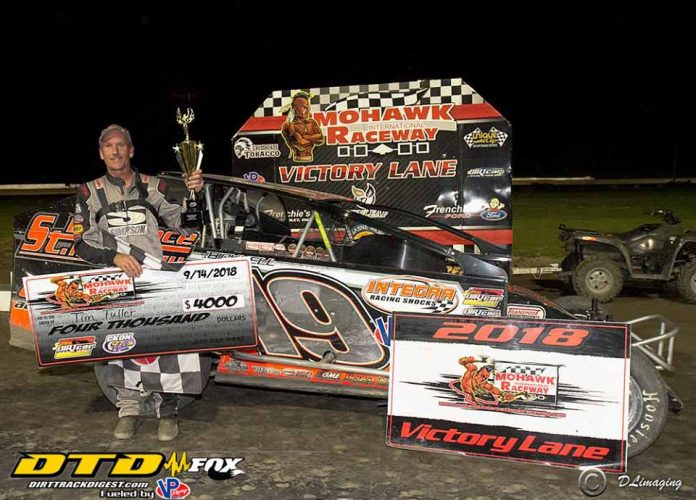 AKWESASANE, NY – With the best weather in the history of the Mohawk Nationals at the Mohawk International Raceway race fans and drivers saw a packed house on Friday night with the DirtCar 358 Modified North Series, DirtCar Pro Stocks, Unique Ecigs Sportsman Series Finale and the Can Am Mod Lite Series. All 4 divisions put on a fantastic show for the fans and night sponsor 97.3 CKON radio. Familiar names took top honors along with a brand new winner.

The DirtCar 358 Modified Series saw Lance Willix charge to the front of the field and dominate the opening 10 laps with Lee Ladouceur, Kyle Dingwall, Mat Williamson and Jeff Sykes battling in the top 5 early on. It had been over a year since Lance Willix saw victory lane at Mohawk and was poised to make a run but Mat Williamson was on the charge to the front of the field. The St. Catherines Ontario native and 16 time winner this season, moved in to challenge the leader as he took 2nd from Ladouceur on lap 20 and quickly closed in on Willix. On lap 24 Williamson finally took over the leader and began to pull away but behind the top 5 which included Carey Terrance Kyle Dingwall and Jeff Sykes, 2 time track champion Tim Fuller was on the move from the back of the field and was looking to make history. Fuller, who had to win a last chance race to make it in the race, moved into the top 5 by lap 40 as he got by his cousin Jeff Sykes and then Lance Willix to move into 4th, and the chase was on. Up front Williamson continued his great run and was well in command to possibly score his 2nd ever series win. The caution flew for the first time on lap 50 as Jordan McCreadie slowed with a problem in turns 3 and 4. On the restart Williamson and Terrance took off but Fuller was right there and started to put on the pressure. He would get by Terrance off turn 2 and immediately went to work to close in on Williamson. The yellow flew again on lap 56 as Michael Parent broke the front end on his car ending a great run. On the restart Williamson did all he could do but Fuller was on a mission. In turn 3 Tim Fuller charged to the bottom and pulled off the slide job as Williamson attempted the crossover move but Fuller was now in control. Over the remaining 20 laps Tim Fuller authored a dominant performance and score his 9th win of the year breaking Pat O’Brien’s all time single season record of 8 set back in the 1992 season. The win was not without a little tense moment. “I got into 4 so hard jumped the cushion and my hand knocked the seatbelt loose.” Fuller said in victory lane. Who was all smiles after breaking O’Brien’s win record. Behind Fuller at the finish was Mat Williamson, Steve Bernier, Lance Willix and Carey Terrance.

The Unique Ecigs Sportsman Series finale was set to take place with a 50 lap contest. Thomas Cook was looking to make a return to Mohawk victory lane since June 22nd as he led early on over 2018 track champion Brianna Ladouceur, Ricky Thompson, Moise Page and Miguel Peterson. The first yellow flew quickly on lap 8 as Greg Snyder, who fought handling issues, lost the handle I turn 1. On the restart Cook remained in control but Brianna Ladouceur and now Ryan Stabler, who made a big move to 3rd, were on the charge and looking for a way around Cook. On lap 13 the yellow came back out as Gavin Riddell slowed on the back stretch. As the green flew Cook once again stayed in front but Ryan Stabler started to charge forward taking 2nd from Ladouceur on the top lane and quickly moved in on cook for the lead. The top 2 would race side by side for the lead but Cook remained up front as Ladouceur retook 2nd with Stabler, Cedric Gauvreau and Justin Lalancette completing the top 5. As the laps began to click off and the leaders entered traffic, the top 2 were in a class of their own using the bottom lane. Ladouceur tried several times to get by Cook but the Hogansburg native had just enough to hang on. With 10 to go it was an intense battle between Cook and Ladouceur but behind them Ryan Stabler was in a battle of his own with Cedric Gauvreau and Justin Lalancette who came from deep in the field after winning a last chance race to get in the show. On lap 48 the red flew as Mike Trapp flipped his race car in turn 3. Trapp would climb out without injury. On the final restart Cook took over the lead but Cedric Gauvreau was making a late race charge as he moved by Ladouceur for 2nd and quickly ran down the leader. However it would not matter as Thomas Cook scored the big win in the Unique Ecigs Series finale. Gauvreau, Ladouceur, Justin Lalancette and Ryan Stabler made up the top 5.

The DirtCar Pro Stock Series saw 17 cars take the green for a 50 lap contest and RPM winner Rock Aubin was in control early with Sid Harmer Jr., CD Beauchamp, Jonathan Viens and Ryan Stabler completing the top 5. Aubin had one of the dominant cars in the early laps but 2 tie series winner CD Beauchamp was on the charge and looking for the lead. On lap 18 Beauchamp would take the spot away as Aubin slipped to 2nd and found Sid Harmer Jr. on his bumper in 3rd with Jonathan Viens and Stephane Lebrun completing the top 5. Once in front it appeared Beauchamp was on his way to his 3rd series win of the year but Sid Harmer Jr. was on the move and started to put the pressure on as Lebrun, Aubin and series points leader Jocelyn Roy made up the top 5. With just under 10 laps remaining Harmer knew he had to make the move for the lead and did just that coming off turn 2. The top 2 drivers made slight contact as Harmer took the lead but Beauchamp would lose control of his car and spin, ending a shot at a potential win and the yellow flew. This left Lebrun and Roy to challenge Harmer and deny him his first ever tour win. On the final restart it was Harmer in front over Lebrun and Roy as the top 3 put on a great show. August 19th 2016 Sid Harmer Jr. claimed his first ever DirtCar Sportsman win, on this night, Sid Harmer Jr. would take his first ever DirtCar Pro Stock Series win at Mohawk. Stephane Lebrun would cross in 2nd over Jocelyn Roy, Rock Aubin and Pascal Payeur.

The Can Am Mod Lite Series was in town for the first if a 2 night invasion at Mohawk. After 2 quick cautions to start the event Michael Dion would waste no time taking control of the field in the 20 lap event over Jeff May, Harley Brown, Kevin Foster and Dan Reif. On lap 11 Jeff May would showcase his talents but taking over the top spot and start to put on a driving clinic. Behind the leader Harley Brown was also on the charge as he worked on Dion for the number 2 spot as track champion Dan Reif moved to 4th with Doug Williams on the move to 5th now 5th. It appeared Jeff May was going to walk away and win by a country mile but on lap 17 the caution flag flew as Doug Williams slowed in turn 1 ending his shot at a possible top 5 finish. On the final restart the efforts over Michael Dion and Harley Brow would not be enough as Jeff May would go on to his 3rd win of the season at Mohawk and keep his perfect record alive having won his previous 2 starts on June 29th and August 24th. Michael Dion held off a late charge by Harley Brown for 2nd with 2018 champion Dan Reif and Kevin Foster completing the top 5.

Mohawk Nationals night 1 is complete and now night 2 is in sight as the Big Block Modified Super DirtCar Series takes center stage along with the 5th annual Pete Mitchell Memorial 100 for the DirtCar Sportsman North Regional Series, The Can Am Mod Lite Series is back again and the Eastern Ontario Vintage Stock Car Club will also join the program. Hot laps and time trials begin at 6pm with the first qualifying heat taking green at 7pm. Show up early as a day of family fun is in store with great food available and live music beginning at 2pm. Stay tuned to mohawkintlraceway.com, our Facebook and Twitter pages for more information.

Can Am Mod Lite Series