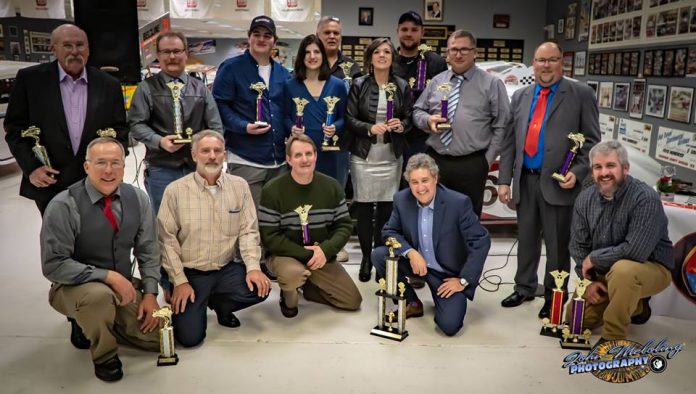 “We weren’t sure if this was even a possibility” Series Director Jeff Ciglich explains, “However when we reached out to Jim Olin, we were pleasantly surprised to learn we got the go ahead from Curator Jack Speno”

Technical Director Derrick Flynn adds “ I can’t think of a more appropriate place for Tim Hegarty, whose family was so heavily involved with the Kingston Speedway, to receive his awards, than here, amongst so many of his fellow Kingstonians who have been inducted here, in the Hall Of Fame”

Those in attendance had a hard time deciding whether to talk about this past season and their own cars or racing from decades past while they dined amongst some of the most iconic vehicles to ever have raced in the Northeast.

This was the series first ever banquet with the Champions of 2017 also being honored. Tim Hegarty of Kingston, Ontario received his awards for being the Nostalgia division champion 2 years in a row. He will not be making it three however as he will be changing ranks to run in the Modified class in 2019. John Stanley, also of Kingston, On and Athens, On native Nathan Berry would receive their awards for the Modified division Championships for 2017 and 2018 respectively. Stanley will be looking to reclaim the title next year while Berry will being leaving racing altogether. The DMNT wishes Nathan all the best in his future endeavours.


Chip Gauthier of Granville, NY was the winner of the SuperGen Products lucky giveaway.

2019 is looking to be bigger and better with more tracks expected to be in the mix and more cars to be in competition.

The DMNT would like to issue a very special thank Jim Olin and the Hall Of Fame for their support of our series by allowing us to celebrate 2018 at such a wonderful venue.

The 2018 edition of the DMNT was brought to you by: CARtoons Magazine, MVCC Airframe & Powerplant Technology, SuperGen Products and Shaw Insurance