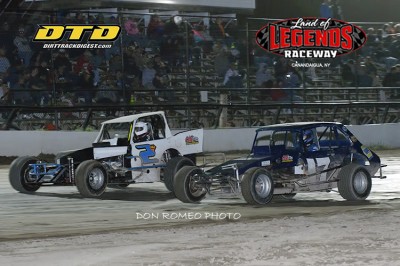 With a brand new season comes a fresh start with fresh faces for the DMNT. In particular the Nostalgia class (50’s & 60’s) once thought to be on life support in vintage style racing will see a dramatic upswing in participation. Many of those machines will be coming from the defunct Mid State Vintage Stock Car Club. Jim Hilimire of Penn Yan, NY will be fielding three cars at various events throughout the 2019 season and he is bringing two to Land Of Legends Raceway this Saturday, including a John McArdell tribute car powered by a six cylinder engine.

In addition to Hilimire, former MVSCC President Brad Litzenberger, Ted Scott and Richard Taggart are all expected this Saturday.

Merrickville, Ontario’s Darrell Wilson will be making the trip to compete in the Nostalgia class as well, Darrell was the first ever DMNT Nostalgia class feature winner back in 2017.

In the Modified class (70’s, 80’s) once again Jon Kuleszo should be the man to beat when he races and he most certainly will be at LOLR this Saturday. Former DMNT Champion John Stanley and Bob Johnson will not only be looking for the checkered flag but are expected to compete for the Championship this year as well.

Chip Gauthier will be piloting his fiance’s car this week as his machine is still under construction. Once he is in his own car, Lisa Hitchcock, a raw rookie, will take over the driving duties on her pink number 5.

As of this writing, Allie Elkins is expected to make her debut behind the wheel of Pete Stapper’s 72 Dodge Challenger bodied Teo and Megan Ciglich returns after much improvement during the latter half of 2018.

Ed Lawrence of Seneca Falls, NY will be behind the wheel of a period correct 84 Birosh and Michele Kuleszo will be back once again in her Pinto bodied racer.

Returning DMNT Officials Derrick Flynn (tech) Tom Coughlin (pit steward) and Mike Verbeek (race director) will be joined by Jim Olin (starter) and Doug Elkins (announcer) which should result in an efficient and informative program for drivers and fans alike.

The green flag drops on the 2019 season at 7pm this Saturday.

The 2019 Edition of the DMNT is brought to you by: SuperGen Products, CARtoons Magazine, Swagger Factory Apparel and FlowMax DPF 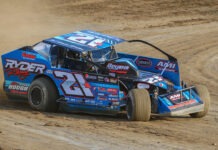