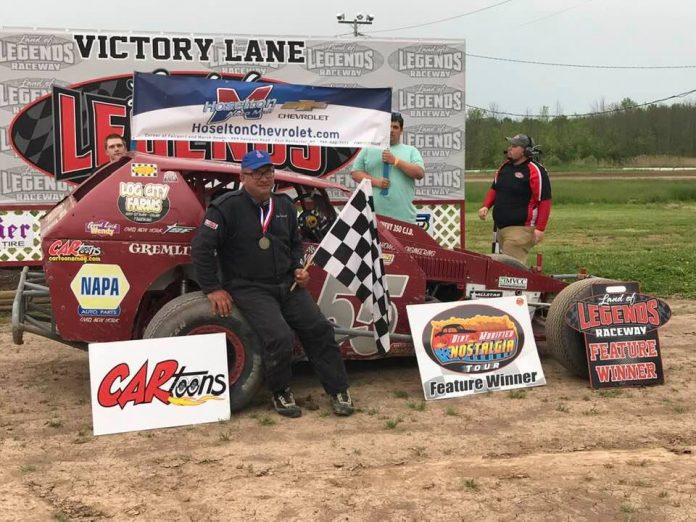 CANANDAIGUA, NY – The Dirt Modified Nostalgia Tour saw a familiar face and a fresh new one in victory lane here at the Land Of Legends Raceway this past Saturday night.

Romulus, NY native Jon Kuleszo would blast off from his pole starting spot by virtue of his heat race victory in the 15 lap affair and would cruise to victory. Bob Johnson of Horseheads, NY would finish a distant second with former Nostalgia division driver Ed Lawrence of Seneca Falls third. North Augusta, Ontario’s Megan Ciglich would round out the Modified field with her career best finish in fourth.

All the action was taking place in the Nostalgia division with Rochester, NY’s Richard Taggart claiming his first ever career victory in 40 years of racing. The 70 year old Taggart dogged the Jim Hilimire owned machine driven by Craig Chisom for most of the event, finally making the pass for the win coming out of turn four, placing 5th on the track under starter Jim Olin’s checkers but first in his class. Chisom would be followed by heat winner Darrell Wilson of Merrickville, Ontario.


Legend Ledger…Mechanical woes affecting cars both in attendance and cars that were expected this past Saturday….Denzil Billings Jr. electrical, Michele Kuleszo fuel/carb, Chip Gauthier spindle and Jim Hilimire mechanical…Feature went green to checkered…we would like to thank Paul Cole and Land Of Legends for moving our heat and features up early in the program allowing us to complete our show…we would also like to wish LOLR Official Lee DePew a speedy recovery after he was struck by Chip Gauthier’s tire in heat 1…The series takes a week off then returns to action with a big triple header weekend June 14th at Penn Can, the 15th at Five Mile Point and wrapping it it up on the 16th at Utica Rome.

The 2019 Edition of the DMNT is brought to you by: CARtoons Magazine, Swagger Factory Apparel , Super Gen Products and by FlowMaxDPF 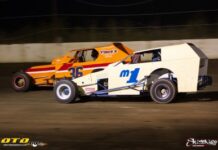 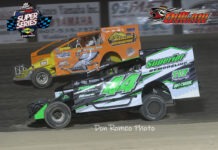 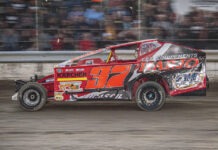