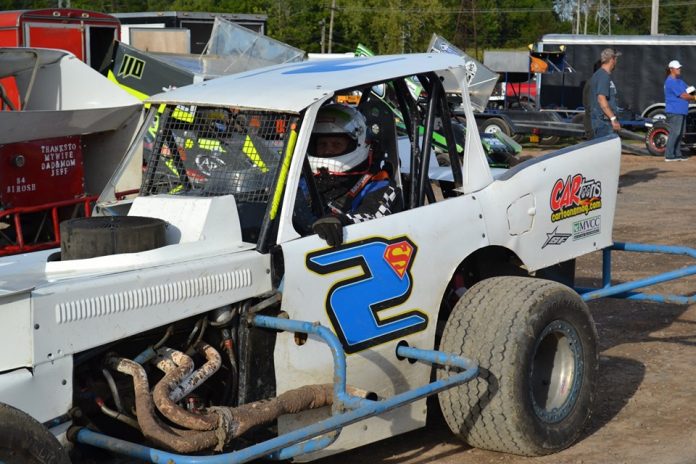 GENEVA, NY – With threatening weather around the Finger Lakes area this past Saturday the Dirt Modified Nostalgia Tour squeezed in it’s Fall Brawl event when Series Director Jeff Ciglich called an audible and instead of running heats, ran the 22 lap feature in their place.

Bradford, PA’s Steve Longo would jump out to the early lead by virtue of his pill draw but within a few laps Kingston, Ontario’s John Stanley would power under the #20 machine and look for his first feature win of the season. DMNT Modified Champion Bob Johnson of Horseheads, NY would have other plans however as he would track down the blue deuce and make what seemed a move for the lead on the backstretch of the tight 1/3 oval. Just as the Quickskinz #56 was set to clear however Johnson would experience drive line failure and he would coast into the infield. This would leave Stanley in command where he would never be challenged the rest of the way, winning in convincing fashion. Longo would hold on for second with an ill handling race car ahead of a hard charging Matt Barbour of Brockville, Ontario with North Augusta, Ont native Megan Ciglich fourth.

Chip Gauthier of Hartford, NY would cross the line fifth but claim his first ever Nostalgia class feature win.

Pit notes…Nostalgia Champ Brad Litzenberger would suffer a flat tire during the feature…a surprise entry in the form of legendary driver Dick Ackerman with the flat head powered machine…Longo having suspension issues but still registering his best DMNT finish to date…Chip Gauthier finally saw light at the end of his long tunnel of a season…we would like to thank Paradise Speedway and Bill Glitch for one final run in 2019.

The 2019 Edition of the Dirt Modified Nostalgia Tour is brought to you by: CARtoons Magazine, SuperGen Products, Swagger Factory Apparel and by FlowMax DPF