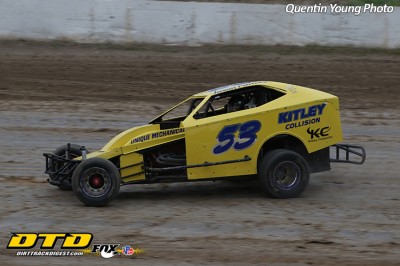 ATHENS, ONT – The 2019 DMNT season has barely come to a close but already plans are being made for the 2020 campaign.

Jason Powers of Athens, Ontario has already announced his intentions of running the DMNT series in it’s entirety as he looks to capture the Modified division crown next year.

Powers finished fourth overall in points this season with five feature wins. Two of those came at the Can Am Speedway in an extremely competitive field, plus wins at Fulton, Paradise and Albany Saratoga.

With current 2019 Champion Bob Johnson of Horseheads, NY not expected to return next year Powers immediately becomes the odds on favorite. However, with another large schedule planned across New York State, Pennsylvania, Ontario and Quebec along with a host of new faces expected in the class, competition should be stout. And depending on scheduling one of the toughest competitors for the title could be his son, Josh Powers who had a win at the Plattsburgh Airborne Speedway in 2019.

“We are focused on one thing and one thing only, being the Dirt Modified Nostalgia Tour Champion” explains Powers. “That means we will be running every race, wherever and whenever they are.”

The 2019 season officially closes out for the DMNT Saturday, Novemeber 23rd at the Dirt Motorsports Hall Of Fame in Weedsport, NY with social hour at 6 pm.

The 2019 Edition of the DMNT is brought to you by: CARtoons Magazine, Super Gen Products, Swagger Factory Apparel and by FlowMaxDPF.

The DMNT is a unique brand of racing with two separate divisions, both of which pay homage to the Northeast Dirt Modifieds historical roots. The Nostalgia class consists mostly of authentic oem framed coupes and coaches, restored to their former glory featuring 6 cylinder, flat head and small block Chevy’s, Ford’s etc. The Modified class utilizes a more modern chassis such as a Bicknell, Teo, Troyer etc with steel Gremlin, Pinto, Coupe, Coach, Vega etc bodies to replicate the cars of the 70’s and early 80’s. Mud Bus style cars mounted on period correct 80’s chassis are also permitted to compete with a weight penalty. Engines are restricted to small blocks with a 2 barrel carburetor. The series features full on competitive racing and keeps track of points earned to ward the top point getter in each division for the DMNT Championship