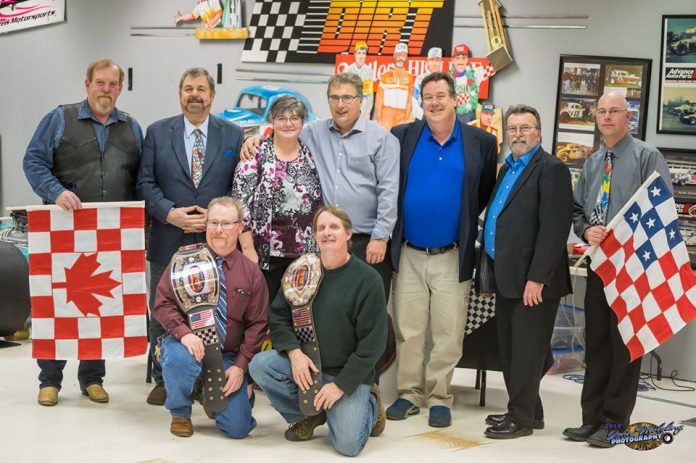 WEEDSPORT, NY – For the second time in as many years the Dirt Modified Nostalgia Tour celebrated it’s Champions here at the Dirt Motorsports Hall Of Fame this past Saturday night.

Brad Litzenberger of Romulus, NY in the Nostalgia class and Modified division winner Bob Johnson of Horseheads, NY were honored for their respective Championships this year. Litzenberger is expected to return in 2020 to defend his title and although Johnson was not expected to return, he did hint in a recent interview on Doug’s Dirt Diary that there is a possibility of something now happening for next season.

Megan Ciglich of North Augusta,Ontario was recognized as the most improved driver of 2019 with strong showings at the Can Am Speedway late in the year. Tim McColman of Kingston, Ont and Allie Elkins of Liverpool, NY were the Rookie Of The Year recipients for the Nostalgia and Modified divisions respectively.

It was an unusually tough season for quite a few drivers resulting in not only the usual “Hard Luck” award but a Harder and Hardest Luck as well. Scott Gauthier of Mooers, NY would take the Hard Luck, his brother Chip of Hartford, NY would claim the Harder and Darrell Wilson of Merrickville, Ontario would claim the Hardest. Darrell cemented this award by not only blowing an engine in his race car but his motorhome towing the car. He would cap of the season with a rollover at Mohawk International just to solidly claim the worst luck of 2019.

Contingency winners were Denzil Billings Jr., John Stanley, Bob Johnson, Chip Gauthier and Brad Litzenberger for the Super Gen Products rewards. They each have their choice of a generator, power inverter or a pressure washer. Megan Ciglich, Scott Gauthier and Tim McColman were the winners of the Swagger Factory Apparel contingency of a custom made firesuit, gloves and shoes. And lastly Allie Elkins was the winner of the open crate engine donated by FlowMax DPF.

Two new Championships were announced for 2020, the first of which is the Midstate Championship which will be a 6 to 8 race mini series within the greater DMNT schedule. All Southern Tier tracks on the schedule and a handful of Central NY venues will be part of the series named in honor of the Midstate Antique Stock Car Club. It’s hoped this new mini series will generate a lot of interest and hopefully participation.

“This was always something I wanted to try in Motorsports” explains Series Director Jeff Ciglich “Although it initially looks like a gimmick we believe once the season starts and the points start to tally it will add some excitement to the season. Plus it might give a few drivers some extra incentive and motivation now that they can contribute to a team. And for some it may be an opportunity for a Championship they might not otherwise be able to capture”

The DMNT would like to thank the the Dirt Motorsports Hall Of Fame, Jack Speno, John Meloling, Rich Applebee , Jim Olin and the rest of the staff for once again giving us such a wonderful place to hold our awards banquet.

The schedule for 2020 is slowly taking shape and the series is expecting to see many new faces, returning faces and current faces changing divisions or debuting new cars.

The 2019 Edition of the DMNT was brought to you by: CARtoons Magazine, Super Gen Products, Swagger Factory Apparel and FlowMax DPF. 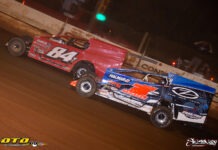