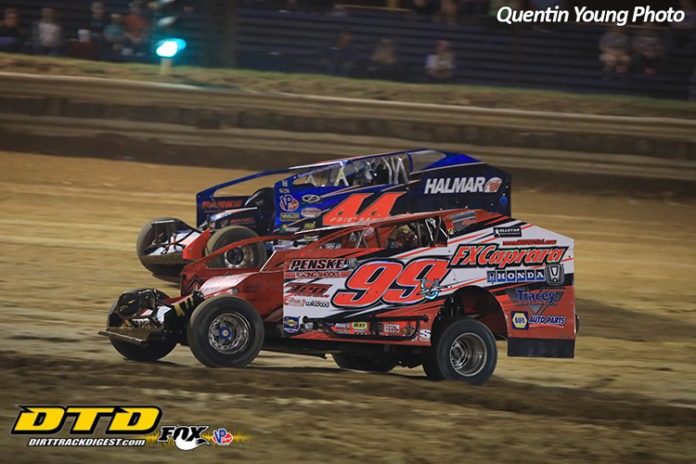 CHATHAM, LA – Larry Wight took advantage of Matt Sheppard’s misfortune in the form of a flat tire to nose out a victory in the 32-lap Southern Super Modified Series event at Chatham Speedway. It was worth $3,000.

“I have to thank my guys for getting this car back together after rolling it at Tri-County,” Wight said. “We swapped motors, put the big block in the Bicknell, then had some issues with that so had to run this car with the little 360, but it was plenty to get the job done I guess.”

Sheppard started pole and led the early stages of the main event, leaving Erick Rudolph and Wight to battle for second, Rudolph secured the spot quickly, with Wight now fending off Stewart Friesen for third. Once settled in, the top four held steady in these spots through halfway.

Sheppard’s lead varied between a quarter straightaway and half a straightaway over Rudolph, at least up until local Caleb Dillard slowed on lap 22. With ten to go, the field restarted double file, and Friesen skated around Wight for third. Rudolph held close to Sheppard for a moment, peeking to the inside off the green flag, but a flat right rear stopped his run on lap 25. The caution flew, and now it was Friesen lining up next to Sheppard.

Wight took second from Friesen immediately, but Sheppard walked away. As the laps clicked away, Sheppard looked untouchable, but bad luck was ready to strike once again. Keeping theme with Sheppard’s dismal 2020 season so far, the left rear tire on the #9s went flat in the waning laps, and Wight closed rapidly. Through the final set of corners, Wight dove under Sheppard, stealing the lead and the win in the Return From The Corona 32 at Chatham.

Wight was a steady second and a half behind Sheppard in the final circuits – up until Sheppard’s race deflated.

“I noticed he couldn’t really hold the bottom, and I wasn’t sure what all was going on,” noted Wight. “I didn’t know if he just changed his line or what, but then he slid up big time when it went totally flat. I got him at the line then the yellow came out, then the guy on the radio is directing us to the frontstretch. I couldn’t see the flagger, so I thought maybe it was the cool down lap or something, but we ended up with the win.”

To say Sheppard has had awful luck would be an accurate summary of his 2020 season. Following two wrecks and a mechanical failure in the three Carolina events last week, things improved with only a flat tire.

“It’s been a rough trip, rough year so far,” stated Sheppard. “I thought we were finally gonna get lucky tonight, we had a really good piece all night long and things finally were going our way, but when the racing gods say you’re going to have a bad time, you’re going to have a bad time. I talked to Charlie Rudolph, and he said Erick hit something on the track and cut a right rear, so maybe there was something out there and we were the unlucky two to hit it.”

Friesen had a relatively uneventful night, snagging the final spot on the podium without any major scares or thrills.

“We tried something in the feature just to see, and it didn’t really work,” said Friesen. “We wanted to get 30 laps under our belt and see what our car would do and all. The track wasn’t really what I expected it to be, the bottom was different than yesterday, but the track prep was way different than practice as well but didn’t react the way I thought. Sheppard was really good in the middle. We have to get better there tomorrow.”

Jack Lehner finished in fourth with Jessica Friesen rounding out the top five.

The Modifieds head 75 circuits around Chatham tomorrow night for $10,000 to win. Catch all the action live on www.dirttrackdigest.tv.