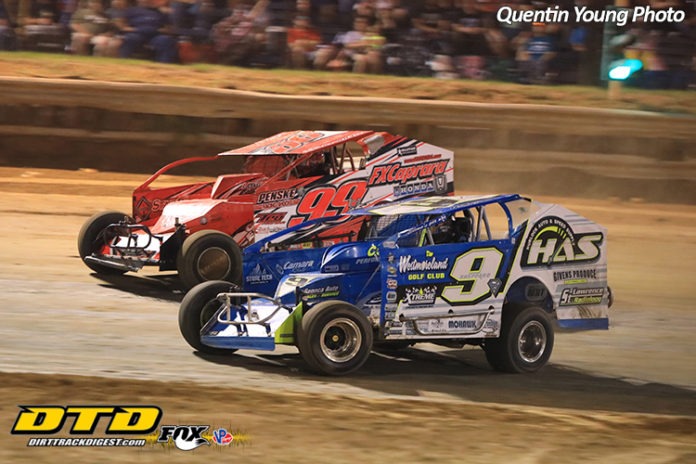 CHATHAM, LA – Matt Sheppard picked the perfect time to break out of his 2020 funk.

Sheppard, of Waterloo, N.Y., came up about 100 feet short of winning the feature on Friday night at the Chatham Speedway. The loss came as a result of a left rear flat in the closing laps which allowed Larry Wight to sneak by for the win.

Saturday night he left little doubt about who was going to win as he dominated the 75-lap feature for the Southern Super Modified Series. He led every lap to win the $10,000 feature.

“This was big, we obviously never gave up but we were finally able to shake that monkey off our back,” said Sheppard. “It always feels good to get the first one of the year, but this one took a lot longer than normal with the bad breaks and the virus. Hopefully we can get going in New York and try and stay hot. This one will make the 21 hour ride back a little easier.”


Sheppard led the field to the green at the start of the 75-lap event, trailed by Wight and Erick Rudolph. Stewart Friesen started second but slipped to fourth on the initial green, but couldn’t regain those spots through a couple early restarts.

Following the lap nine restart, the field settled into a long green flag run around the quarter mile bullring. Sheppard used this extended green to flex his speed, driving out to a full straightaway lead within ten laps, and not slowing much from there.

By halfway, Sheppard had put half a track between himself and Wight, lapping up to seventh spot. With Sheppard untouchable, Wight was left to fend off Rudolph for second, while Stewart was feeling pressure from wife Jessica for fourth.

A lap 49 yellow slowed the rocket pace Sheppard had going, erasing his large lead. Wight was stuck up top for the restart and couldn’t get his car to stick, losing second to Rudolph, then third and fourth to the Friesen family. Despite the new challenger in the runner-up spot, Sheppard darted away from the field just as fast as before.

As the laps wound down, Sheppard’s lead expanded, returning to a full straightaway gap quite quickly. A drama-free finish is exactly what Sheppard wanted, and at the drop of the checkered, it was Sheppard claiming the win in the Return From The Corona 75.

Rudolph was the other victim of a flat tire in yesterday’s event, popping a right rear while running second. Like Sheppard, the tires stayed up, and Rudolph claimed second.

“Sheppard was just the class of the field tonight,” noted Rudolph. “He was able to capitalize on restarts and stuff better than anyone. We were okay, the car could’ve been a little better, but he definitely had us covered tonight.”

Stewart Friesen finished third and third on the weekend, heading home with a clean car and two solid paychecks.

“I expected the 9s to be the guy to beat after last night, and that was definitely the case,” Friesen said. “He had way more forward drive than anyone, but that’s what he works on. It was a neat experience to come down here and meet the other Modifieds in the world, we made some new friends this weekend that race our cars down here and some good memories.”