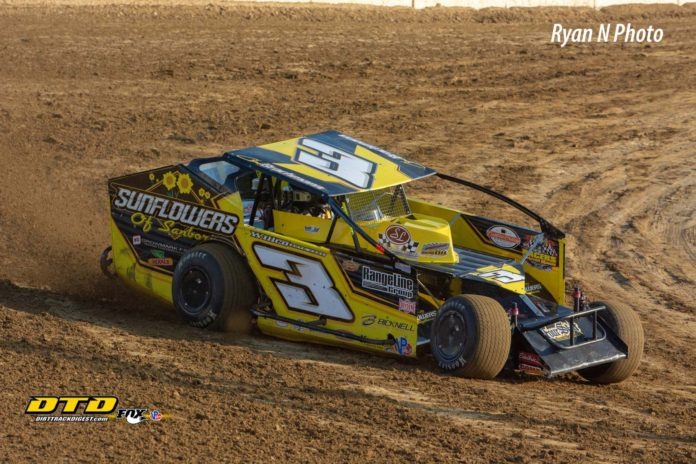 MERCER, PA – Chad Brachmann was the class of the field on Saturday night for the BRP Modified Tour event held in memory of the Edward Michaels family at Michaels Mercer Raceway Park.

There were 28 cars registered in the pit area for the event, but Kevin Hoffman and Shawn Fleeger had mechanical problems during the heat races that ended their evening early. The 26 car starting field was led to the green flag by Tom Glenn and Chad Brachmann. The first five laps were uneventful until Rex King, Sr. brought out the yellow on lap five. After this caution, two red flag periods took place when eleven cars both times blocked the track after the restarts. No one was injured but after these two red flag periods, the field was reduced to 18 cars for the restart of lap six.

Chad Brachmann who had led the first five laps found Rex King, Jr. right on his back bumper followed by Jim Rasey and Paul Kot after the restart. A caution on lap nine for JR McGinley who spun in turn three grouped the field back together and after the restart, King, Jr. bobbled just enough to let Jim Rasey and Garrett Krummert make the pass for second and third. The caution flag flew once again on lap fourteen for Rodney Beltz who came to a stop on the apron on the front straightaway.

Once racing resumed, Brachmann was in charge and started to pull away from Rasey and Krummert. Rex King, Jr. started his charge back towards the front again and by lap twenty-eight had made his way into second, but was unable to catch and pass Brachmann who held on to lead every lap and pick up the $5,000 top prize money. Chad Brachmann also was awarded $50 for the Fastest Lap award compliments of Competition Carburetion of Sun Valley, NV. On top of that Brachmann also received $100 compliments on Alex Snyder, a fan of the Modified division at Michaels Mercer Raceway Park.

Finishing second behind Brachmann was Rex King, Jr. followed by Garrett Krummert, Jim Rasey and Brad Rapp. Brad Rapp will receive an extra $10 in his check in loving memory of Ed Hallstein, grandfather of Sue Kane and Steve Barr and Great Grandfather of Dillon Barr, who raced at Mercer many years ago and passed away last season. Also receiving a $10 bonus will be 20th place finisher Tom Glenn, in memory of Ed Hallstein.

Bob Oliver of Competition Carburetion also awarded $250 to the driver that towed the farthest distance to get to Michaels Mercer Raceway Park and collecting that money is Greg Martin who traveled 193 miles from his home in New York.

Heat races were won by Rex King, Sr., Dave Murdick and Jim Rasey. The next race on the BRP Modified Tour schedule will be the Rick Hall Memorial Race at Tri City Raceway Park on Sunday, August 30, 2020. The way it is looking right now, the season ender will take place at Hummingbird Speedway on Saturday, September 5, 2020 in our first ever visit to the Bird! 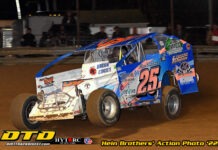