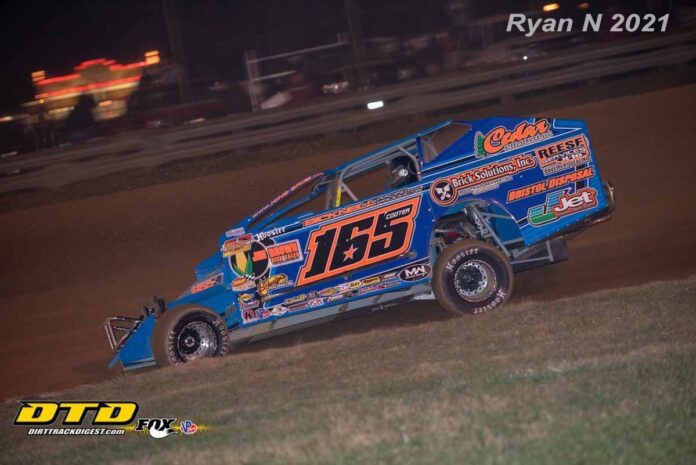 MERCER, PA – Under a beautiful blue sky with temperatures nearing 70° Michaels Mercer raceway opened it’s Historic 70th anniversary season with the annual running of the chiller thriller while a jam packed crowd took in the evening.

27 BRP big block modifieds came to do battle on the tricky 3/8 mile bent egg oval with much attrition during the heat races. all but two cars were able to start the feature that put Rex King Jr on the outside pole. after multiple restarts king jr. led the entire way but was hounded by Garrett Krummert for the entire race with Krummert showing his nose under king several times. king was able to hold off Krummert at the end of the 35 lap feature. The New York state contingent finished 3-5th with Justin Haers third, Chad Brachmann fourth and Erick Rudolph fifth up from the rear after an early tangle.King Jr said “I’m very fortunate to have a race track that stays around for so many years. I couldn’t hear Krummert or see the scoreboard and I knew him and the New York guys were tough but we had just enough to be where we were tonight! I’m surrounded by great people let’s get back to the good stuff”

Second generation driver Logan McCandless who has only been racing for a few years in the 305 sprints put it all together and led flag to flag in the racesaver 305 sprint feature. Jeremy Kornbau hounded Logan the entire race but could not get around him and ended up in second place. Jake Gomola moved up 4 spots to finish 3rd, Steve Cousins 4th and Kyle Colwell 5th. Logan said “It feels great!!! I can’t thank everybody enough…car held up great and we put on a great show”

In the pro stock main event an exciting contest occurred when Jamie Duncan, who has never won at Mercer, took the early lead but then suffered a small fire under the car to bring out the red flag. he was able to restart at the tail. that put Jamie Barber into the lead who won last year’s little guy nationals but Barber got tangled up with a lap car in turn 4 putting him to the tail as well!!! That put second generation driver Dave Shagla jr in the lead and went on to win his first career Mercer feature. Jimmy Kennerknecht moved up 5 spots to finish 2nd and challenged Shagla in the remaining laps. Chris Withers was 3rd, Jamie Colwell 4th and Ray Gregory 5th.

Garrett Krummert redeemed himself after his 2nd place big block finish by dominating the FASTRAK modified feature leading flag to flag. Chas Wolbert and Brian Schaffer swapped 2nd and 3rd place back and forth and Wolbert went on to finish 2nd, Shaffer was 3rd, Justin Shea 4th and Jordan ehrenberg 5th.

The mighty Mercer mini stocks started with 27 cars that was whittled down to 10 running at the end. Carl Ealy and newcomer Greg Kiehl started on the front row with Kiehl taking control early and was on his way to his first career Mercer checkered but Ealy was not going away as multiple cautions kept bunching up the field. Kiehl was ready to take the checkered flag but broke with a few laps remaining sending him to the pits. Ealy gained control and picked up his first career win in the shortened 10 lap affair. Jacob Wheeler was impressive coming from 21st place to 2nd, Leonard Baker Jr up six to 3rd, Mike Porterfield 4th and Trevn Schaffer up 17 positions to 5th.

The management of Michaels Mercer raceway would like to thank all the fans, drivers and crews for coming for a successful opening night! Mercer will stay dark until Saturday, April 24 when we will be back in action with our regular 4 divisions plus the 410 sprints.For more information on Mercer please visit our Facebook page or our website at www.Michaelsmercerraceway.com. You can also contact the track at 724-662-1310 or on Facebook messenger.