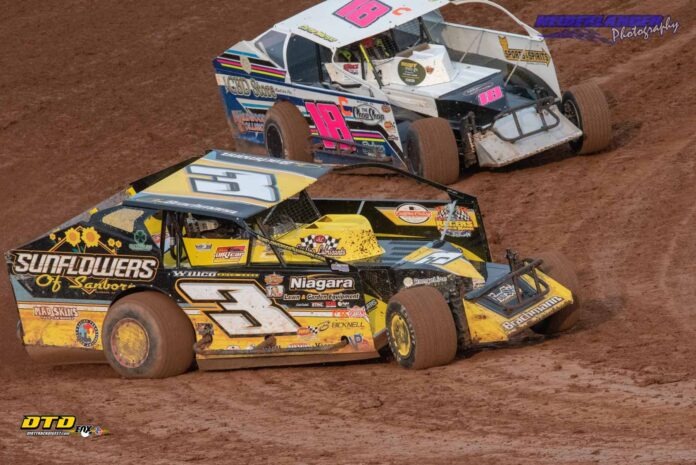 MARBLE, PA – The BRP Modified Tour completed their tenth race of the 2021 season on Friday night at Thunder Mountain Speedway in Brookville, PA. There were 18 cars on hand for the event and Mother Nature stayed away to let the cars compete in the 35-lap event.

On the single file restart, Rex King, Sr. once again took command of the lead with ninth place starter Chad Brachmann now sitting in second ahead of JR McGinley. Brachmann went to work on King,Sr. and the caution flag waved once again for Garrett Krummert after tangling with Tony Pangrazio and Steve Slater. Krummert retired from the event while the other two tagged the back of the field.

The final restart on lap eighteen found King, Sr. and Brachmann going after one another and after some banging of the two cars Brachmann took the lead on lap twenty-seven but King, Sr. fought back and led the next three laps before Brachmann once again did a slide job in turn two to get the lead and went on to pick up the feature win.

Finishing second was Rex King, Sr. Brian Swartzlander who was involved in the initial start accident came from the back of the pack to challenge for second several times, but ended up third at the stripe. Fourth place went to JR McGinley with Rex King, Jr. making his way from the rear to finish fifth.

Sunday, September 5, 2021 at Tri City Raceway. BRP Modified Tour board member Deanne Byers and race car driver Brad Rapp’s wife, Ashley have put together a Clash for Cash for the upcoming race at Tri City and have raised $1,075 for finishing positions 1-26 with each position receiving at least an extra $25 for each position as well as a few of the laps have $300 extra to be divided between them. They also have collected 13 different contingency awards valued at $100 each to be given away on Sunday night.

This will make the Labor Day weekend event at Tri City Raceway a special event for the drivers and one you won’t want to miss. The BRP Modified Tour would also like to welcome Epertherner Auto Wrecking of Grove City, PA back as a sponsor for the 2021 racing season.

The BRP Modified Tour racing series is a non-profit organization established to give Big Block Modifieds in the Western Pennsylvania/ Eastern Ohio area a chance to compete with one another for a higher purse structure and for a point fund for the scheduled events. The BRP Modified Tour was started in 1998 by Tim Engles, Lon and Pam Baker and Randy Myers. The BRP Modified Tour has had great success at bringing regional cars together at various speedways in Western Pennsylvania, Ohio, New York, West Virginia and Canada. We would like to thank the following sponsors for their support of our organization. Bicknell Racing Products, Hoosier Tire Mid-Atlantic, Bazell Race Fuels/Sunoco, Big Daddy’s Speed Center, Epertherner Auto Wrecking, Frankland Racing Supply, Hall’s Safety Equipment, King Bros., McCandless Ford, McCool’s Signs and Graphics, Moore’s Auto Body, Racequip Safety Equipment, Rockhouse Bar and Grill, Slippery Rock Sportswear, and Wrisco Industries. 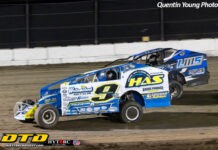