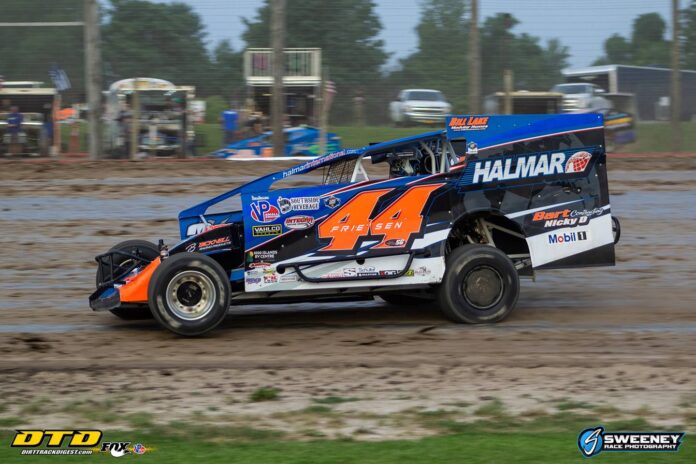 The American Racer Cup season began way back on Friday, April 16 and concluded on Monday, September 6.

Friesen claimed exactly 10 wins at Fonda Speedway to go with Fonda’s 100-point car count bonus to give him the maximum 700-point total. Friesen’s season will award him a total of $11,000 from the American Racer Cup on behalf of presenting sponsors American Racer, distributor Lias Tire of Indiana, Pa., Sunoco Race Fuels and distributor Insinger Performance of Dushore, Pa.

Friesen also finished sixth overall via his Friday home track of Utica-Rome Speedway in Vernon, N.Y., for a total of $13,250 for choosing American Racer facilities as his weekly stops.

A $36,000 purse is dispersed between the top-15 drivers in the overall Modified standings with $10,000 reserved to Friesen, the overall champion. Friesen’s dominance also claimed him $1,000 as the North Region champion of the American Racer Cup.

On the Sportsman side of the American Racer Cup, Utica-Rome Speedway champion Matt Janczuk was a nine-time winner, garnering him 695-points. Janczuk claims the overall championship worth $1,500 and the North Region title, for a grand total of $2,000.

Bridgeport Motorsports Park regular Sammy Martz Jr.’s career year in 2021 was good enough to make him the runner-up in the overall standings and the South Region champion with 660-points. Martz Jr.’s four wins and four second-place finishes will pocket him a total of $1,400.

Stephen Kemery, another Bridgeport Motorsports Park regular, rounded out the top three in the overall standings, just 14-points behind Martz Jr. Kemery will take home $1,050 from the American Racer Cup for his efforts.

Outlaw Speedway’s (Dundee, N.Y.) Alex Payne finished with 634 points, good for $1,000 with regional money added in. Despite out-pointing Kemery based on finishes, Payne ends up 12-points shy of Kemery for third based on the car count bonus points (100 for Bridgeport, 80 for Outlaw).

Penn Can Speedway’s Ray Leonard rounded out the top-five in Sportsman competition with 625-points, good enough for an $800 payout.

Matt Ellery of Bridgeport was fourth in South Region standings, 16th overall, awarding him $200 and Ryan Simmons of New Egypt Speedway was 5th in the South Region, 17th overall, receiving $100.

The top-five drivers in the Modified division at all home tracks receive five free tires for first, four for second, three for third, two for fourth and one for fifth.

The American Racer Cup track champions are determined by a driver’s 10 best finishes at that track.

More than $51,000 in cash will be distributed to American Racer Cup participants in December.

To learn more about the American Racer Cup presented by Sunoco Race Fuels and to view complete point standings, visit the official website at www.theamericanracercup.com.