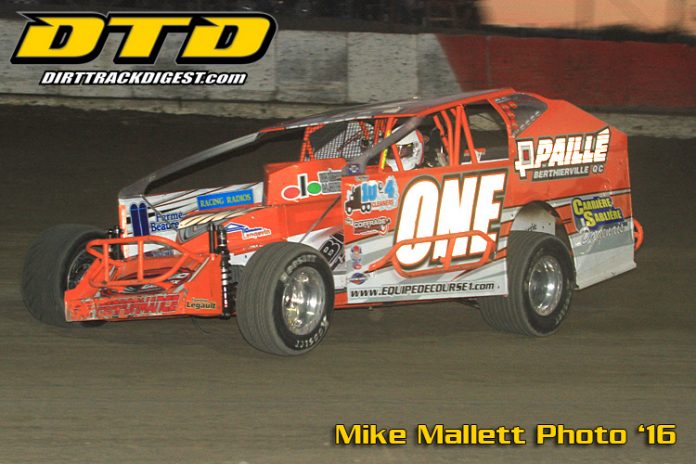 GRANBY, QUE – Mathieu Boisvert # 73Jr starts first in front of Steve Bernard # 54 and Dominic Dufault # 63. From the first round, Dufault and Simon Perreault # 47 hopped respectively 2nd and 4th from inside to the detriment of Bernard. David Hébert’s One went 9th on Mathieu Desjardins’s 1M on the 4th lap from the inside to the top 5 behind the 54. The latter surpassed Perreault for 3rd place on lap 7 from outside. We have in the order Boisvert JR, Dufault, Bernard, Hébert and Perreault until turn 15 where the One makes the outside of Bernard for position # 3. On turn 19, the One made the outside of Dufault to take his 2nd. David Hébert’s One took the first place inside the 73JR when it took the turn 24. Mathieu Boisvert # 73 will take the lead for 2 laps (laps 40 to 42), But Hébert came out stronger at the next raise on the 43rd lap. Alain Boisvert # 73 party 10th arrives 5th only to the raise of the 45th round. Boisvert father wins a position when the 49 of François Bernier leaves the last lap.

Steve Nadeau # 94 part first alongside defending champion Dany Gagné 2nd at the start of this final counting 28 cars. In the restart of the 6th lap, Gagné moved faster from outside in front of Nadeau. Steve from the inside seems to want to take the lead, but Dany will remain the leader until Steve completes the race with Steve in pursuit. If the 3M of Michael Richard leaves 4th, he goes early 3rd and the rest until the end despite the attempt of passing the 8 of Alexandre Salvas by the inside to the resumption of the turn 10. Salvas party 6th will make the 32 Of Guy Ouellet from the outside to the resumption of round 6 for the 4th place. He will swap this long with the 95B piloted by Alex Boisvert, who will harass him off without success. Alex Lajoie’s 33 left from the 10th place,

Rookie Claude Cournoyer # 47 made two races only among us last year when he finished 8th and 6th. He started the evening by earning his qualification and went 11th in the final. On lap 6, he surpassed Sebastien Beauregard’s 83 and Alexis Charbonneau’s 49 from inside to become 4th. Luc Biron # 71 goes 2nd and leads the 2 initial laps. Pierre-Olivier Breault # 20 left 4th, second at first Biron and then passed it on the 3rd lap for the pole. Bruno Lafontaine # 19 3rd place loses a position on 2 positions on the start, then regaining them outside of Jean-Philippe Guay # 09 on the second lap and then on the inside of Charbonneau on lap 4. On lap 9, Lafontaine The bottom of Biron for the second behind Breault. On turn 11, Claude Cournoyer did the same to his friend 71 for the 3rd. We then had Breault, Lafontaine, Cournoyer, Biron and Charbonneau from round 13 to 18. In the restart with two rounds of the end Cournoyer launches 2nd out of Lafontaine. Under the flag Claude passes first. Marc Dagenais # 66 9th picks up to the top 5 at the last time getting up 4th, then 3rd after a hot fight with Lafontaine outside.

The race ended abruptly on the 11th lap with a spectacular accident involving, among others, the 97 of Rolland Hébert left 7th remounted 2nd and the 22 of Frédéric Lussier, left 4th and climbed 3rd. The second portion of this event will be handed over shortly to his head Stéphane Lemire # 115 who was first at the time of the accident.

Special ending finishes go to Josianne Plante # 97 who for his first race of the season in Modified finishes 14th on the round of the leaders. Another mention for rookie Jérémy Roy # 90 at the Sportsman who finishes 17th also with the same lap to the counter than the rest of the pack. It promises!