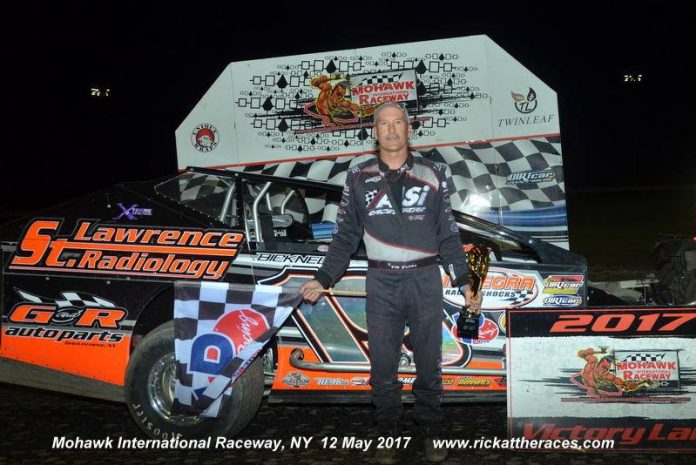 Nearly 100 cars packed the pits this past Friday night for the season opener at the Mohawk International Raceway. All 5 divisions were ready for battle after heavy rain 1 week ago it didn’t take long for the action to pick up quickly. Tim Fuller scored big in the 358 Modified feature, Robert Delormier won a nail biter over Nick Heywood in the Sportsman event, 2016 track champions Deric Ellsworth and Richard Thorton claimed wins in Mod Lite and Bandit respectively and Junior Delormier claimed the win in the 15 lap Novice Sportsman event.

The Modified feature saw 28 drivers take the green flag for their 30 lap affair and Renfrew Ontario’s Ryan Arbuthnot took command early on over Tim Fuller, Brian McDonald Lance Wilix and Carey Terrance. After a quick yellow on lap 3 the field was ready to get back racing Fuller was ready to charge. When the green flew Tim Fuller took over the top spot from Arbuthnot and would put on a dominant driving display by opening up a huge lead on the field. Behind the leader Billy Dunn was also on the move as he battled with Brian McDonald to take 2nd just past the halfway point with Willix and Terrance giving chase. As the laps wound down not even lapped traffic was going to stop Fuller as he continued his dominant run over Dunn, Arbuthnot, Terrance and Danny Johnson who broke into the top 5 with just 5 laps remaining. On this night Tim Fuller was not to be denied as he stormed to the opening day victory with 5 time track champion Billy Dunn crossing in 2nd, Ryan Arbuthnot, Danny Johnson and Carey Terrance would complete the top 5.

32 cars took to the speedway for the 25 lap Sportsman feature and Nick Heywood who had the car to beat would take the lead from the outside pole over Zack Arquiett, Shane Pecore, Robert Delormier and Tristan Draper. Heywood who is a multi-time Sportsman champion at the Airborne Park Speedway on asphalt was having an impressive run on the dirt at MIR as Delormier, Arquiett, Pecore and Brent Kelsey who moved past Draper for 5th, were trying to run him down. On lap 15 lapped traffic started to come into play allowing Robert Delormier to close in but Heywood was up to the task and worked the traffic with no problems. With 5 to go the top 2 drivers had cleared all the traffic and were looking to settle the win. With 2 laps remaining Delormier made a bid for the lead but Heywood was committed to the outside and the 2 drivers raced side by side to the white flag. Heading into the final turn Delormier had a run on the bottom but Heywood kept it wound up on the top, as they drag raced to the line the 2 made slight contact as they took the checkered flag. By 0.009 Robert Delormier was the opening day winner over Heywood, Shane Pecore, Zack Arquiett and Brent Kelsey.

In the Novice Sportsman event Dana Francis took command of the field at the drop of the green flag over Junior Delormier, Danny Sullivan, Agwalee White and Gregg Henry. It didn’t take long for Delormier to take over the lead as he sailed by Francis for the number 1 spot with Sullivan, Henry and White completing the top 5. As the laps wound down Delormier was comfortably in front but began to get into lapped traffic. This allowed Gregg Henry to close in and make a race out it. On the final lap heading into turn 3 Delormier was still glued to the bottom but Henry made 1 last charge but Junior Delormier was not to be denied as he claimed the victory over Gregg Henry, Danny Sullivan, Zack Daniels and Dana Francis.


In the Mod Lite 15 lap event defending track champion Deric Ellsworth was looking to make a statement as he took the lead from the drop of the green with Brad Reif, Kevin Foster, Nick Mallette and Ben Cartier giving chase. Ellsworth would dominate the opening 7 laps before the only caution flew for Ben Cartier who slowed in turn 3. On the restart Nick Mallette showed his muscle by taking the lead over Deric Ellsworth and Brad Reif. Ellsworth would retake the top spot with just 2 laps remaining and despite a last lap challenge the defending champion would march on for the big win over Nick Mallette who turned in a career best finish of 2nd. Dan Reif, Kevin Foster and Brad Reif rounded out the top 5.

In the Bandit division veteran Gary Sharlow lead in the early going but the real story was defending track champion Richard Thorton. After a blown tire in his heat race he was forced to start dead last but that didn’t slow his charge. On lap 5 Thorton took control of the race for good and never looked back scoring his 2nd straight opening day win. The story on the blown tire was even more impressive. “I ran to the pits in the heat to change it and realized I didn’t have a spare, so the crew ran to a store in Massena and bought a tire, mounted it and got it on in time for the feature.” Thorton said in victory lane. Gary Sharlow came home 2nd with Corey Gates, Skylar Ladouceur and Lucas Brown completing the top 5.

Next week a big event as the opening round of the Number One Speed Equipment Sportsman Series will take place along with the TUSA Mod Lite Series, 358 Modified Novice Sportsman and Bandits will also be on the card. Canadian money will be taken at the front gate at par next week plus ladies get in for only $7 dollars all brought to you by Cornwall Flowers and Adirondack Auto Parts. Gates open at 5pm with the first green flag dropping at 7:30pm.