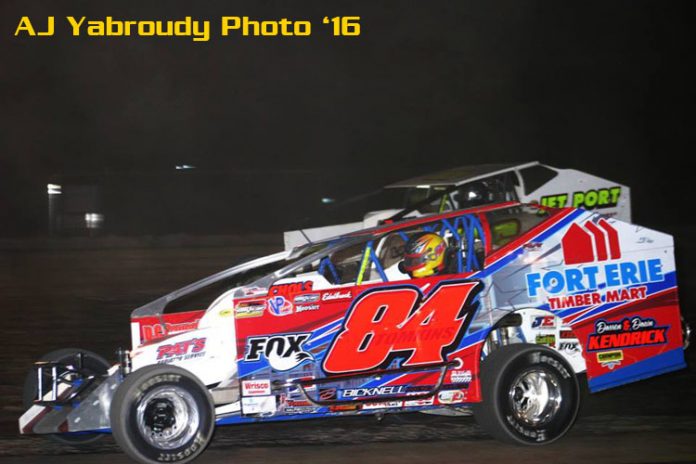 ELBRIDGE, NY – Rolling Wheels Raceway Park, known as ‘The Fast Track’, will open its schedule of special events for auto racing in 2017 on Thursday, July 13th with an event known as the ‘Summer Broiler’.  The race features a unique scenario for Modified and Crate Sportsman competitors as it offers them two chances to race for feature payouts in one night.

“Rolling Wheels had tremendous success offering Crate Sportsman events for cars with American Racer and Hooiser tires as separate classes in 2016,” said Paul Szmal.  “We decided to apply that model for our Modified racers as well for the season opener.”
The Modifieds will compete in Hooiser and American Racer divisions on May 13th, with two feature events each running 30 laps.  Both features pay $3,000 to win and $150 to start.  The Crate Sportsman will follow the same formula, with two 20-lap features paying $2,000 to win and $100 to start.  In addition, consolation races for each division offer payouts.  “It’s a chance for drivers who don’t qualify to at least get something that night,” said Szmal, “And for fans, they are essentially getting two complete two-divisions shows with heats, consis, and features for one ticket price.”
‘The Fast Track’ begins the 2017 season with the return of the American Flat-Track event on Saturday, July 8th.  “The inaugural event last year was a tremendous success and we received lots of feedback asking for a return,” Szmal stated.  “We’re happy to be working with American Flat Track again.”
The facility has opened a new web site, www.rollingwheelsracingpark.com  , where fans can buy tickets to the July 8th American Flat Track event.  Information on the July 13th ‘Summer Broiler’ is also available, with rules and purse information forthcoming, as well as a teaser on upcoming events.  “We’re still working out the details on a reschedule date for the King’s Ransom and other events this season, and we’ll post those dates on the web site once they are confirmed,” Szmal said.
For more information on Rolling Wheels Raceway Park, please call (315) 863-5509 or visitwww.rollingwheelsracingpark.com .